Aren’t I all fancy. ?Two posts in less than 24 hours. ?I must be feeling better. ?Either that or it’s Thursday and time for You Capture. ?I thought about going all lazy on you and bagging it this week since I have taken approximately 6 photos in the last week. ?But that wouldn’t be very sporting of me. ?I thought about pulling something out of the archives (because you know I have lots of those), but again where’s the fun in that.

The theme of the week is expression. ?You would think that would be easy with my child. ?Just snap a photo of him making a dumb face. ?I took one of those actually. ?However, I thought it better to think outside of the box. ?Whereas my box includes me still being slightly sick and in my housecoat (ie, things inside of my house).

I have a huge expression all over my house. ?It happens to be my favorite collectible. ?I collect crosses. ?I have an entire wall in my laundry room of crosses. ?They are in (almost) every room of the house and on the house. ?It isn’t so much because I’m a Bible toting Christian, but because it is one tangible expression of my faith. ?That and a constant reminder. ?I need those.

These happen to be a collection of crosses my MIL gave me a few years ago. ?I believe she purchased them at a craft store and put the mat and frame together. ?The boy loves to count them over and over. ?They are just outside of my kitchen so I can see them while I’m cooking. ?Of my entire collection they are some of my favorites. 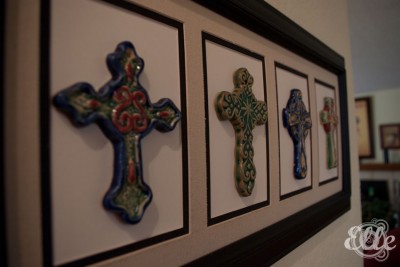 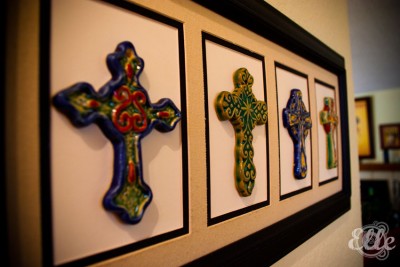