We are into the 5th day of 10 without Derek.  Where is he?  He’s supposed to building a house with Habitat for Humanity in El Salvador.  Instead, he’s doing things like cleaning metal roofs and getting to play with kids at a local daycare center.  Why?  Because the weather map looks like this: 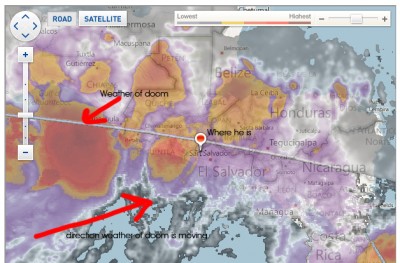 Now, I’m no meteorologist, but I’m pretty sure that’s bad.  We tried to talk to him last night over Face Time, but he was in a building with a metal roof and the rain was so loud that he had to hold the iPod up to his ear to hear us.  The weather is so bad that the work site is flooded.  It is supposed to rain like that all week long.

So the short story of where my husband is: He’s in a foreign country getting to play with kids at a daycare.  What am I doing?  Holding onto my last grip of sanity getting to entertain my child and the neighbor child.  So pretty much we’re doing the same thing thousands of miles apart.  Fun times.

While my husband is enjoying his Central American sabbatical I have been carrying on daily tasks and household duties.  One of my projects included finding a hockey program  for the boy.  I am quite aware that the boy has been skating for the last 3 years.  I am also quite aware that most hockey programs have already started for the season.

At the end of last season Derek talked to the coach and was told that this season they would be starting a new U-8 cross ice program.  It sounded like the perfect next step for Oleg.  We were excited about it.  The cost was going to remain the same so we wouldn’t be paying more than we had been.  He didn’t have the details, but told us that he would send them when he had them.  Round about August Derek emailed the coach (calling our rink is impossible since no one returns your call).  He asked when the program was starting and the practice time.  Coach didn’t have all the details yet and practices would begin in October.  We purposely waited on signing Oleg up since we didn’t know if we were moving and we didn’t know when soccer practices would be.  (just don’t)

We finally received the soccer schedule and Derek once again emailed the coach.  Nothing.  Not even a return email this time.  He checked out the rink’s website to see if there was any more information.  Derek found that the U-8 development program started last Saturday.  Not a single word from the rink or the coach.

My job was to find a new program.

Our other local rink is closed for renovations and they don’t have a stellar hockey program anyway.  That left 2 other rinks.  Both rinks are about 30 minutes from our house.  I investigated the North rink only to find out that their Mite program costs $1500 for the season and has to be paid in full by October 1 for kids to start.  I know hockey is expensive, but even that is a little extreme.

I investigated the West rink.  Their website doesn’t give any information about prices, but the schedule says they practice Sunday afternoons and Wednesday evenings.  This program would be perfect.  It fits into the soccer schedule.  It fits into my personal schedule.  I emailed the coach to see if there was space left and the cost involved.  Nothing.

I understand that hockey isn’t huge in the Northwest.  I’m not trying to push my child into playing.  I was fully prepared for him to say he wanted to give it up when we asked him what he liked better, baseball or hockey.  His answer was baseball.  The reason was because he got to play games.  We hadn’t heard much about hockey from him so we assumed he didn’t want to play.  When the Autumn started he started asking about hockey.  The child wants to play.  We’ve discussed the possibility of changing rinks and he’s slightly ok with it.  I think that if it means he gets to play hockey than that’s fine.  As long has he gets to play.

This morning I’m calling the rink to get the word.  If we get the ok to sign up then we have to drive all the way to Lynwood to get new gear (Oleg grew out of his), drive back home and be out to the rink by 6:00.  Did I mention I’m watching the neighbor girl this afternoon?