Yesterday we decided to have a family outing. ?We haven’t done that in a very long time and there was a new exhibit that opened on Saturday at the Pacific Science Center. ?I informed the husband that we would be going and at breakfast I had a conversation with the child about this being a good day and there would be no screaming, whining or talking back.

As an aside: Every day, for the past I can’t remember how long, has included some form of the above malady.

The child agreed that it would be a good day and after we had all gotten ready for the day we set off in search of a fun family outing.

The first agenda item was to do a little shopping. ?That was successful since we walked out of all 3 stores we entered with nothing. ?From the Westlake area we walked down Pike to the new Hard Rock Cafe. ?I love the Hard Rock. ?If I’m visiting a city and there is a Hard Rock in the area I’ll be there. ?We had a great lunch, a well behaved child and Derek took some photos. ?Despite having to turn the ISO way up on the camera this shot of me turned out quite good. ?I love how you can see the reflection of Derek taking the photo. ?This is one of the only un-photoshopped photos of me. 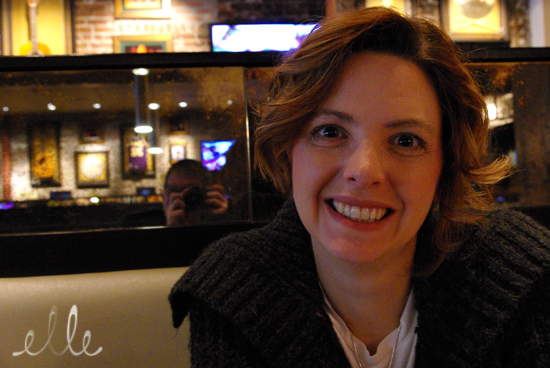 After our lunch we waded our way past Pike’s Place Market (one of my least favorite places in Seattle) to Sur La Table to look for a candy thermometer. ?Both of mine died this year and I wanted a nice high end one that would last more than one candy season. ?No luck.

That was enough of downtown so we hopped on the Monorail to the Science Center. ?I am not exactly sure what I was thinking trying to go to a brand new exhibit on the weekend. ?I though that maybe because it was Sunday that it wouldn’t be overly busy. ?Oh holy nerdy hell. ?The place was packed with rube-a-licious rat-tailed kids (I thought that fad died in the early 90s) trying to solve the puzzles and hogging all of the stations. ?However, we did our usual run through the butterfly house where sweated off 15 pounds and snapped 1 good photo. 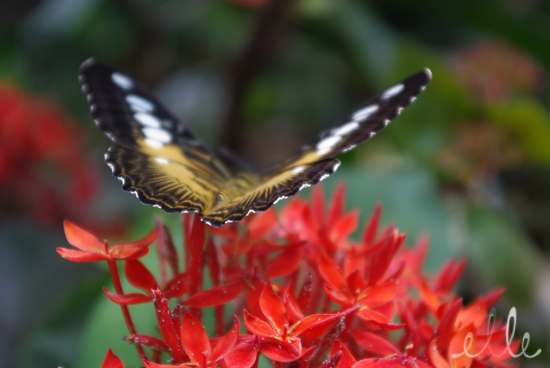 After running around the crowded Science Center for a few hours, in cashmere socks (what the hell was I thinking) and mules and having not recovered from the butterfly house sweat-a-thon I was thirsty. ?I talked the boys into stopping for a snack and something to drink. ?I purchased a cookie the size of a small child and a lemonade the size of my head with enough sugar to send a small third world nation into diabetic shock. ?We found a bench to enjoy our snack. 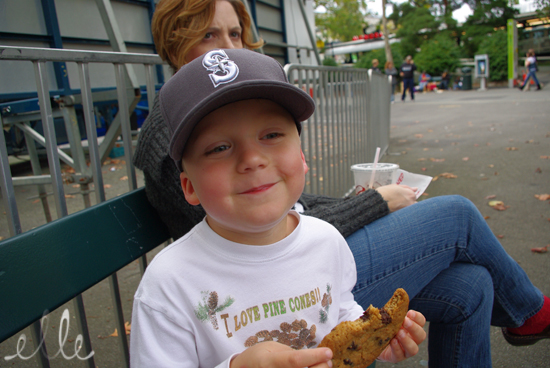 Please note the furrowed brow on my face. ?This is either because I didn’t have my sunglasses on or foreshadowing of impending doom. ?I’m going to go with the latter.

The child handed me the cookie remains and then informed his father that he wanted to ride the carnival rides. ?It should be noted that the cookie and lemonade cost a small fortune and in order to pay for the rides we would have needed to take out a second mortgage on our house. ?It was the cookie or the rides kid. ?At this point the child started screaming. ?Did I mention that the bench we were sitting on was right at the bottom of the Space Needle? ?It was, see. 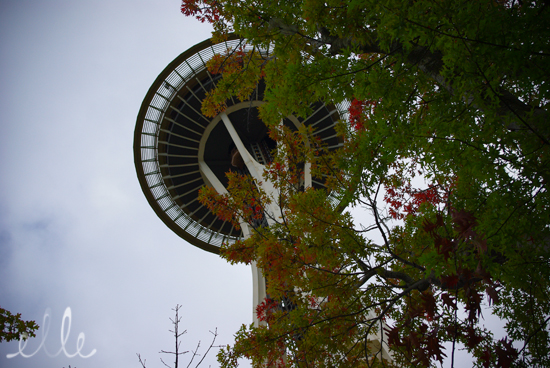 That meant that hundreds of people were walking by to visit the famous Seattle landmark… also staring at the screaming child. ?He started in on, “you aren’t letting me have any fun.” ?When we explained that the rides cost money and that we didn’t have it to spend (also note he has never ridden any of these rides because they are so damn expensive) he progressed to screaming at the top of his lungs, “I WANT MONEY!!” ?At that point I got up and sat at another bench. ?A few minutes later I moved benches again because I could still hear him. ?Ten minutes later they boys came walking over and we agreed to leave. ?This is where the day took a nose dive. ?Oh, you thought a screaming child in the middle of a busy park was bad? ?Think again buddy.

In order to get from the Science Center back to downtown we needed to take the monorail (the mode of transportation that got us to the Science Center). ?However, the monorail is the single least reliable mode of transportation in all of Seattle. ?It’s like traveling to Paris and thinking that public transport will be your go-to get around town mode. ?Of course the monorail was out of service. ?The lady informed us that it was closed for at least the next hour. ?That meant it was closed until at least June of 2012. ?This left walking (or a cab, in which I would have to sell a kidney). ?Walk it was. ?Only not if you are 5. ?The 5 year old decided that he needed to scream about that too. ?Our options were sit around the Science Center for an hour and listen to the child scream some more about not being able to ride the rides or walk to downtown carrying the said screaming child. ?We voted for option B. ?Halfway to downtown the monorail whizzed by us. ?A few minutes later we strolled past the monorail sitting on the track above us (sans people because they were testing it… unsuccessfully). ?Of course the child again started to whine and cry that he wanted to ride the monorail. ?I suggested we walk back all the way we came, wait for an hour and still have to walk to downtown because odds are, they aren’t going to fix it. ?He almost went for it. ?It should be said that the distance between the Space Needle and downtown Seattle is only about a mile.

What started out as a lovely family day went south. ?I blame lack of food and too much excitement. ?Just when I think that we can handle a day like that I am reminded what it takes to pull such an endeavor off. ?Next time bring snacks and institute mandatory rest periods.

Despite it ending on a bad note I did go through the photos and found this one. ?He’s just too cute to resist. ?Look at those freckles. 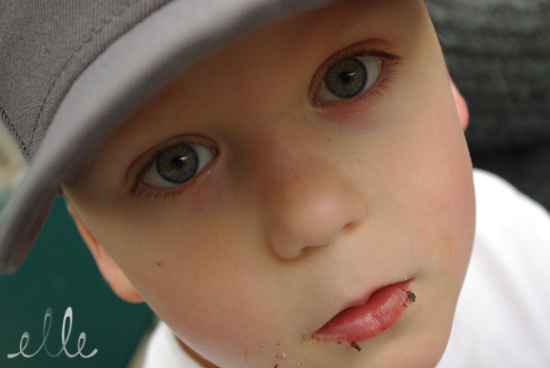 It should also be noted that I slept in the car the whole way home.