On the day we went to pick the boy up, or was it just for a visit? I can’t remember. Anyway, one day when we went into the baby home to see Oleg we entered the little office room before the groupa room to see a gaggle of little ones shredding a newspaper. We weren’t exactly sure why they were doing this, but there was newspaper everywhere. A few days later we were in our apartment in Russia and Oleg had found a copy of the Wall Street Journal that we had picked up in the Seoul airport. In fact, I have a few photos of him with the paper. It was cute. I snapped the photos and returned to the sofa. A few minutes later we heard this ripping sound. The child was sitting in the apartment foyer shredding the newspaper. We tried to take it away from him but he screamed as if we were torturing him.

Since coming home Oleg has the tendency to make any larger item into smaller items. If something comes apart he will take it apart. Legos are best kept as individual pieces (although he will build things with them on occasion). At 2 he figured out that you use a screwdriver to take the battery plate off of toys and removed the batteries from his Tigger airplane ride on toy. If it has a removable antenna he’ll take it off. If he can cut it into little bits he will.

The other little behavior he has is squirreling things. He loves boxes and bags. If there is something he can put something else into he will. After his birthday someone came over to visit. I was telling them about this little quirk. I pulled out 5 gift bags from around our family room. Every one of them had miscellaneous toys in them. A few train parts, a lego, a silly band, random stuff. We’ve given him a little metal box that we call his treasure box. It is for him to put things into. He can put whatever he wants in it. It usually satisfies the urge to squirrel, but there are times when we have shoe boxes or other boxes around the house that make it into his room and full of stuff.

As I’m sitting captive here on the couch I noticed the dog chewing on something. I look down and she has this. 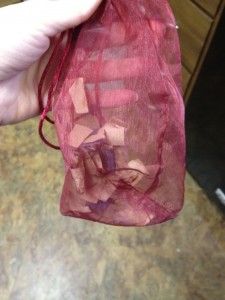 Take a closer look at what’s inside. 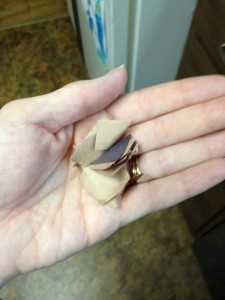 Yep, little scraps of paper. The child cut little tiny scraps of paper and stuffed them into a bag. This isn’t the first time he’s done this. He does it with yarn & feathers (that was a fun one to clean up) too.

At first these were very annoying behaviors. Now it’s become a little character quirk that I don’t exactly find endearing, but livable. What kinds of habits do your kids have that annoy the hell out of you?