The kittens are about 6 months old now.  We aren’t 100% sure as to when their birthdate is so we kind of guess as to how old they are.  All we know is that they’ve been terrorizing bringing joy to our home for 4 months.  I thought I’d share a little more about them. 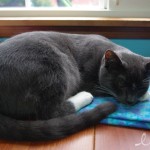 Oh Truman Truman Lively.  Truman is the biggest turd in the world.  However, he is so incredibly gorgeous that you can forgive the water glass that he just knocked over or the furniture that he decided to scratch.  We are completely convinced that Truman is the reincarnation of Julius AND Isis.  He is grey, likes to sleep on a lap at night, eats like a porker and very talkative like Isis.  He is huge (the largest of the 3 by far), loves a tummy rub and always in the way like Julius.  Truman hates cuddles.  You may pet him, kiss him, scratch him or rub his belly but for the love of god don’t pick him up and try to cuddle him.  He will strong arm you.  Truman likes to sleep on the “blanket” on my desk or in the rocking chair.  He likes to tease the dog and is the only one of the 3 that can jump up onto the kitchen counter.  These are not endearing qualities.  He is the quietest purrer and rarely makes biscuits.  He is very talkative to the point of being whiny.  He loves the boy and insists on getting in the child’s bed every morning.  He wanders around searching for Oleg when he isn’t home, and then cries about it.  His face is unique.  He looks rather cross-eyed when his eyes are wide open.  At first glance he looks like he only has one eyebrow (whiskers).  Really one is white and one is grey.  He is truly a beautiful cat and I love him so. 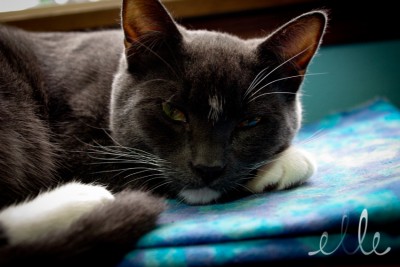 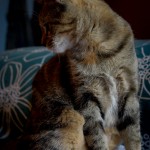 Oh Fi, you little peanut.  Fiona is like a cat on crack or at least with multiple personality.  At one minute she can be a sweet little girl and then turn into a total spaz.  She is quick and if she doesn’t want to be caught she won’t be.  Fi likes to cuddle.  Her favorite cuddling spot is on my arms while I’m trying to type.  The “blanket” on the desk was put there for her, but her brother stole it.  Fiona’s cuddling would be much cuter if she wasn’t such a drooler.  Gallons of drool pour from this cat’s mouth.  She has taken up residence in Isis’s old spot on the back of the couch.  Fi is also very enamored with the birds outside.  I have 6 bird feeders right outside my office and the living room windows to keep her occupied.  She chats with them on occasion.  Her little mau is so sweet and cute.  It comes out more like “ah mau!”  Her favorite toy is a rubber band and she carries it all over the house.  Fiona is also not much of a cuddler except in the middle of the night.  She likes to sleep in between me and Derek and often will sleep right next to my face.  Literally.  She is the smallest of the bunch, but has fur that is like silk.  Her coloring gets more beautiful by the day.  She is sweet and lovely and I love her so. 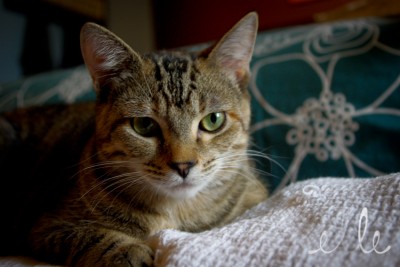 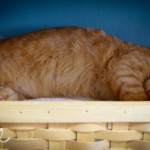 Oh Hamster.  There is so much to say about Hammond.  Hams is the peoplest of people cats.  He sleeps the least and annoys the most.  He likes to cuddle with is sister in the quilting basket in my office.  He gets in my face every morning to wake me up.  He is like a little boomerang.  You push him away and there he is again.  Hammond is an aggressive cuddler.  What the other two lack in cuddling ability Hammond makes up for.  He will get up onto your lap and knead you like crazy, to the point of driving you nuts.  He never stops purring and if he does finally lay down don’t touch him.  If you do he’ll wake up, yell at you and then starting kneading all over again.  Hammond had wonky back legs.  We first noticed it when he walked.  Hammond flicks his tail from side to side when he walks.  He also prances a bit.  I call him Prancy Nancy.  Derek told me to stop calling him Nancy lest he start to think his name actually is Nancy.  The next indication of something just not quite right with him is that sometimes when he sits on your lap and kneads (which is all. the. time) his back end bounces.  It is disturbing at first and you think he’s getting rather frisky, but in reality it’s just his back legs and an involuntary reaction.  He does it less now that he’s a little older.  He’s also not a very good jumper.  Hammond must lay on a lap, but if not a lap he’ll lay on my seed starting box or in the quilting basket in my office.  He prefers to lay in the basket with his sister.  Hammond is best friends with the dog and will occasionally cuddle with her on her bed.  (I do have a photo of that on my phone).  Hams is also a porker like his brother and quite the rolly polly little dude.  He has a Jay Leno chin and his fur is still floofy soft.  The end of his tail feels like it was nicked off.  The other two have long pointy tails.  Ham’s is shorter and blunt on the end.  He loves to wrestle with his brother and is the main instigator in toilet paper snatching.  He likes to get into the bath tub after showers or baths and the water doesn’t seem to bother him.  He is a quirkly little dude and I love him so. 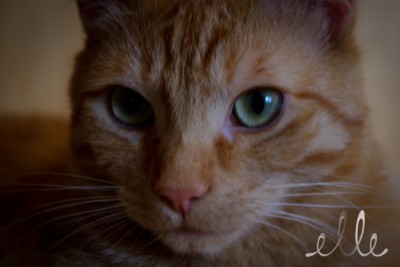