Comments are now closed.  Taste testing flavors have been selected and the taste testers will be notified by the end of this week.

Today is September 20th.  You know what that means?  That means it’s time for the Sweet Hope Primary.  It just took me about 20 minutes to figure out how I did the primary last year.  I’ve been doing this so long you’d think I could remember.  Well… no.  In fact, I had to make a flow chart to figure out how this is all done.  Don’t believe me.  See for yourself. 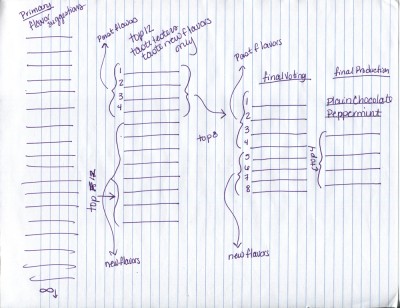 Here is the breakdown of how this works:

You suggest flavors that you would like to see in final production for Sweet Hope truffles this year.  We’ll take suggestions until sometime on Friday.  You can suggest a new flavor, suggest a flavor we’ve already done (your favorite perhaps) or second (or 3rd or 4th) a suggestion that’s already been made.  The multiple votes are what matters.

The top 4 vote getters in the “previously sold” category get an automatic advancement into the final voting round.  The top 8 “new flavor” or “previously taste tested” suggestions will be made into prototype truffles and handed off to the taste testers.

The taste testers will get the prototype truffles the first week in October and will have 2 weeks to make their evaluations.  The top 4 from that voting will make it into the final voting.

The first week in November you will have the opportunity to make your voice heard.  I will post the annual flavor voting poll on this website and the top 4 from that voting will make it into final production.

The final flavors will begin sales November 7th or 12th (we haven’t decided yet).

Here is a list of what we’ve previously taste tested, but didn’t make it to final production:

You have until sometime on Friday to make your suggestions.  I have other Sweet Hope news, but it will have to wait until next week.  The board is meeting Sunday afternoon we’ll have all the details then.

Just as an aside… if you happen to suggest a flavor and it makes it to taste testing, YOU will get to be a taste tester.  Incentive, I hope so.