The first two weeks of December are the single most busy weeks in my life. ?This year was especially busy because of the shear number of chocolates and caramels I had to make (1882 truffles and 2088 caramels to be exact). ?So far I’ve done 1941 truffles and 1804 caramels. ?I still have 216 truffles to make. ?And now you are wondering what public school I went to for that math. ?Extras people, extras. ?I have to have some kind of reward for doing all of this.

I will say that I could not have gotten as far as I have without the numerous volunteers that have helped so far. ?Last Saturday I had about 8 volunteers that did at least 4 days worth of work. ?The past 3 days I’ve had my girlfriend, Raissa, her to help. ?We’ve taken turns cooking dinner and it has worked out great. ?I have help tonight (none on Friday *hint*hint*) and a crew of people coming on Monday. ?I will get this done.

So with all of that work, I certainly did not expect to have other life things piled on top of it. ?Things like a puppy. ?Add to that a 5 year old and well… he’s 5. ?Enough said. ?Then he’s the 5 year old with some tactile issues (read: doesn’t like to touch the dog) and well… I need a little Prozac. ?Mom, can you hook me up?

Other than one “minor” incident yesterday when the dog decided it would be fun to crap allll over my bedroom carpet it hasn’t been terrible. ?It would be nice if we could get her to sleep in her crate at night, but she cries and wakes everyone up. ?She sleeps in there, but if we close the door it is like torture. ?Instead, the cats sleep with us (nothing new), dog sleeps in the crate and comes down to our bedroom to wake us up to go potty. ?We made it through the night last night without an accident. ?WooHoo! ?Of course this morning the cats both decided to simultaneously puke. ?One eats the Christmas tree and the other, he’s just a world class puker to begin with.

We are finally getting a rhythm around her. ?It includes closing the doors to every room of the house. ?It’s just better that way. ?The cats are also adjusting to the change. ?There is less hissing and scratching and they are not hiding in the bedroom anymore. ?I guess this is a good sign. 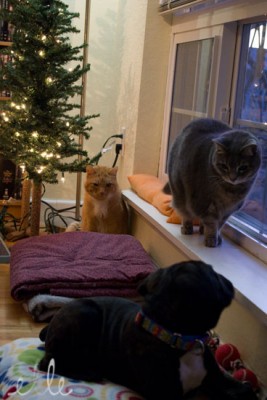