After all, I actually know what the Bush Doctrine is.? Ok, we’ll let it go.

Sunday was a day I had waited for for a very long time.? We took the boy to buy his very first pair of hockey skates.? Real live hockey skates.? Up until now he’s been on a pair of Bob skates.? I get lots of comments on them at the rink and they are right up there with the best $14.95 (dammit, they’re cheaper now) I’ve ever spent.? But on October 4th my boy gets to start hockey lessons (if the local rink would ever email me back with the registration info).? I have to say after our visit to the rink for the initial information he was pretty excited about it.

We thought that with just a few weeks to go before lessons start we should go out and buy skates.? That way if we couldn’t find his size or they were way too expensive we still had time to order them off the internet.? We can rent all of the equipment except a stick and skates.

Off to the Giant Mega Outlet Mall to the only sporting goods store within 50 miles (outside of an ice rink) that sells hockey skates.? They had little skates, but we weren’t seeing any in size super small child.? I sat down on the floor in defeat and looked up to find one lone box of size youth 9.? We laced them up and tried them on the boy’s feet.? They are a little big, but they’ll do. 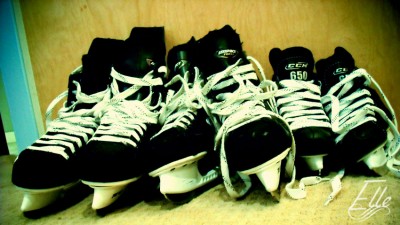 I tied up the skates and had him try to walk around the store in them.? Normally when a child puts single blade skates on for the first time their ankles are so wobbly they can’t keep from falling over.? Not my boy.? Within 2 seconds the kid was trotting around the store.? He wasn’t holding on to anything.? He only fell over once and even then he could get up by himself without assistance.

Granted, things will be a little different when he is on ice, but then he’ll be fully padded (which might not help the getting up situation). 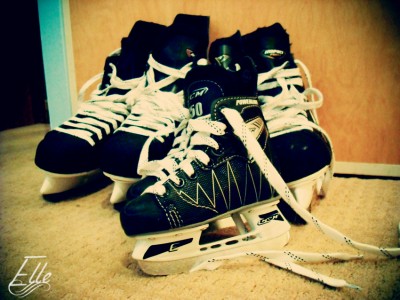 If my child had a choice he would have worn the skates right out of the store.? I cried a little.