For the kitty fans I thought I would give you a little more insight into their little personalities.  We’ll start with Hammond since he is the most likely to sit still for a photo.

Hammond (aka Hammy or Hamster) is the most subdued of the bunch.  He will play with his brother and sister, but only when the mood strikes him.  However, if he wants to play then they best be ready.  Hammond will let you pick him up, cuddle him and he will purr and melt into you.  He prefers to lay in the sun and reminds me so much of Julius.

Are Hammond’s eyes blue?  Mostly.  It depends on how the light hits them. 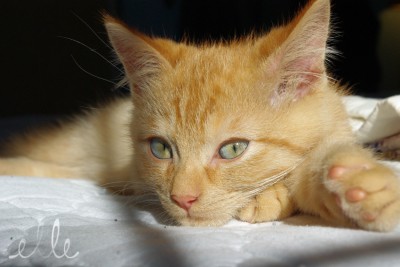 This is the best photo of what his eyes are actually like.  They are the most beautiful green on the inside and soft blue on the outside.

The best part about Hammond… his fur.  He has the most soft cottony fur you’ve ever felt.  It is like his is a floofy cat, but with short hair.  You have to feel it to understand and that just means more cuddles for my little man.