Last week I got bored and thought I needed a change. ?It was so bad that I had a momentary lapse of reason and thought that I could color my own hair. ?At 34 years old I should know that that is a colossally bad idea. ?Lucky for me I had the child in tow when I was shopping and didn’t have the patience to look for hair color.

A few weeks ago I went through a crisis of do I cut it all off or let it grow out. ?I carried around a few photos of me (one with long hair and one with short hair). ?I asked opinions. ?None of them were definitive except the boys I work with both agreed that the short hair cut made me look like a lesbian. ?Not really the look I’m going for. ?Grow it out it was.

I’m really ok with the style of my hair. ?It was looking a little dry since it hadn’t been cut since early July, but other than that it wasn’t bad. ?Besides, I’m trying to let it grow. ?So I thought color would be the best option.

I found some photos of a color and cut I really like and milled about it for about a week. ?My intention was to get my hair cut last week, but I ran out of time. ?This week I was determined to get it done. ?The problem is that my stylist is over 30 minutes away. ?I also was considering the thought of a fresh pair of eyes on my hair. ?I’ve tried to change stylists before with less than spectacular results, but there is a new salon near my house so I thought I’d give it a shot.

Tuesday morning I called the new salon to see if they had an opening. ?They did. ?I made an appointment for that afternoon. ?If I had made it for later in the week I would stew about it and probably cancel the appointment. ?After-all, I’ve been seeing my stylist longer than I’ve been married to my husband. ?When I try to see someone new it feels like cheating. ?Especially since I get such an awesome deal from her (divide what you pay for your hair by at least 1/2).

I took in my photos, I liked the lady, I was there for 2 hours because my hair is “special” and didn’t want to take color. ?I was going for a dark chocolate brown, however any color I try to put on my hair turns out red. ?Blonde=strawberry. ?Dark Brown=auburn. ?This poor girl put color on that was 1 shade lighter than black in order to achieve what we were after. ?The resulting color is fabulous. ?I love it, but man alive was it a process. ?She also trimmed up the back to get rid of the thin ends giving me an overall great look.

Would I go back? ?I’m not sure. ?I love the lady. ?She was nice, fun to talk to and did a great job. ?Like I said, I feel like I’m cheating on my other stylist and at over double the price I’m not sure I can afford to make this a regular thing. ?What I can say is that it was fun. ?I enjoyed getting out and doing something for myself.

Oh, you want to see? 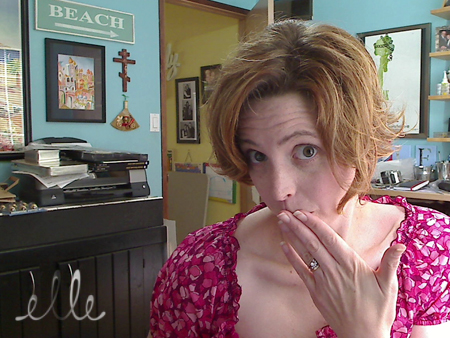 This is before. ?I had the back of my hair up in a clip, which is often how I wear it. 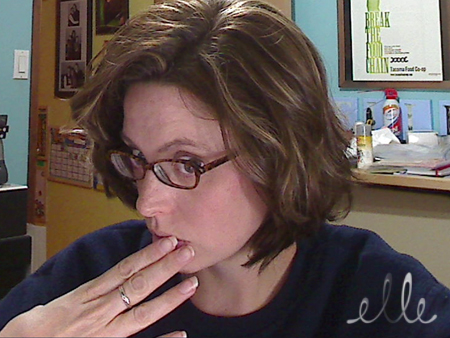 This is after. ?It is much darker in the back than it is in the front.