By my calculations, when all is said and done, it will be three summers that I will be unable to garden.  One reason I was looking forward to the teaching gig was summers off.  I could sit by a pool or toodle around in my garden.  That is proving to not be the case.

Think about it.  Last summer was spent packing and moving and unpacking.  This summer will likely be spent undergoing chemo treatments.  Next summer will be recovery from reconstruction surgery.  Cancer is stupid.

I bought this house mostly because of the kitchen.  The next reason was that it had a garden space I felt that I could make my own.  The existing garden here is horrible.  There are some redeeming factors in the back yard.  However, the front has 2.  There is a Wolf Eye Dogwood as a focal point and a plethora of lily-of-the-valley.  Oh, there’s a very large deciduous azalea as well.  Make that 3.  I hate the rest.

Shortly after we moved in we began visiting nurseries in the area.  Our list of affordable options is quite limited.  The only “nursery” in Renton is a McLendon Hardware.  Surprisingly it has an incredible garden department so that is a bonus.  My go-to independent is Squak Mountain.  My favorite is Wells Medina.

On our first visit to Wells Medina Derek began complimenting their planting areas.  He said he wanted our garden to have that kind of look.  He loved the colors and textures and lushness of all of it. 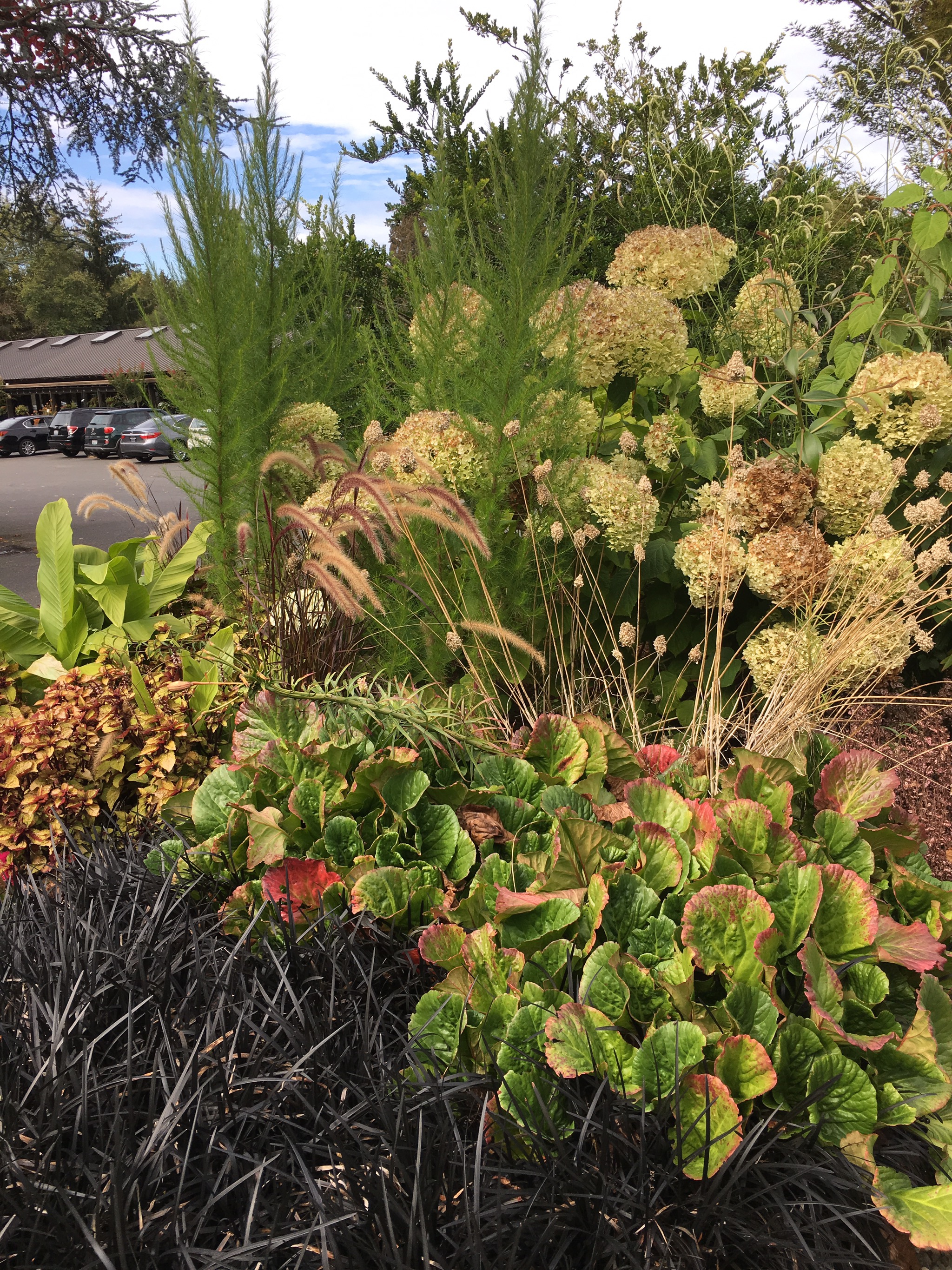 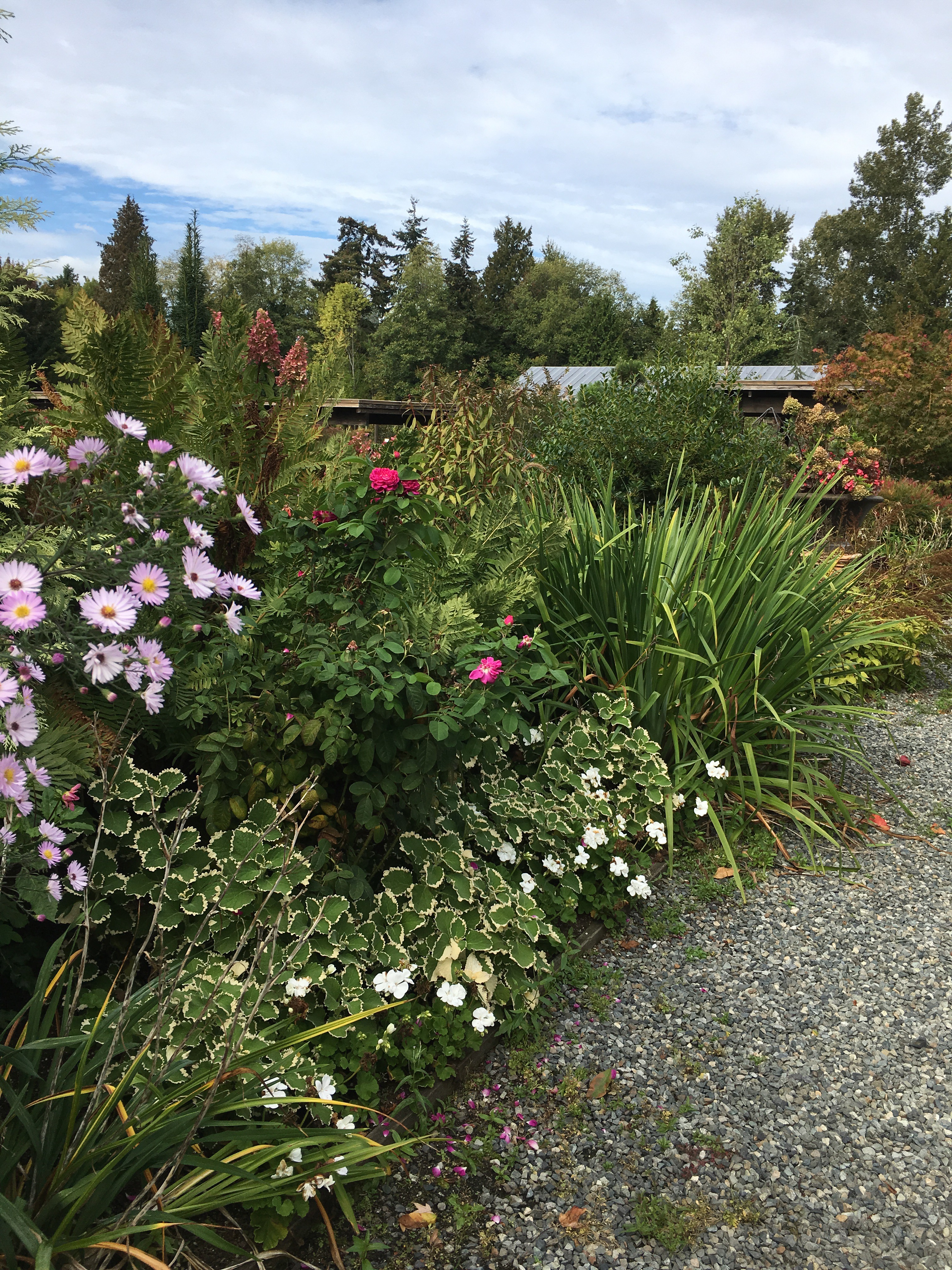 I have to agree.  I loved the look.  There were a few plants in there that I didn’t care for, but I liked the mix of perennials and annuals.

Then there came that day when we came home and there was a deer in my front yard eating the rose bush.  Then there was that bunny that ran across the street.  ANIMALS!!!  I didn’t have to deal with animals at the old house.  It was a luxury.

Designing this garden was going to prove more difficult than originally anticipated.  I got to work researching deer resistant plants.  I started drawing. 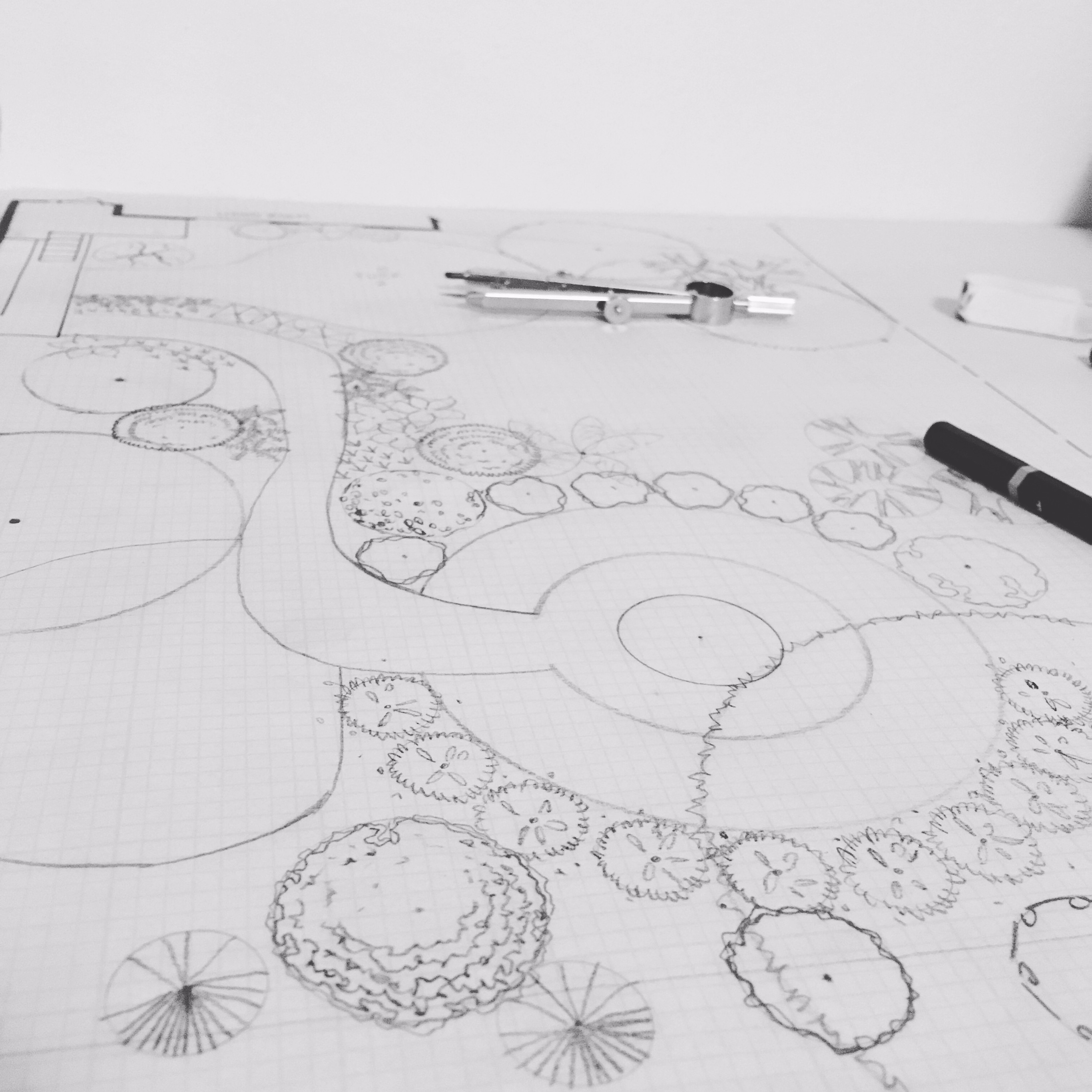 I am determined to have a plan with this garden.  The former one was more of a “collector’s garden.”  I had beds laid out, but would bring home plants and just plop them in.  It was beautiful, but very difficult to maintain.  This time around I am more deliberate with what I want.  I have a running list of plants I want for my garden.

In addition to the garden at Wells Medina, I’ve taken inspiration from a section of the perennial border at the Bellevue Botanic Garden.  As an exercise in following a garden space for a year, I’ve taken my advanced students on a near monthly field trip to the garden.  Their job was to find a piece of the garden that spoke to them and then to write about it each month for the year.  I too selected a space. 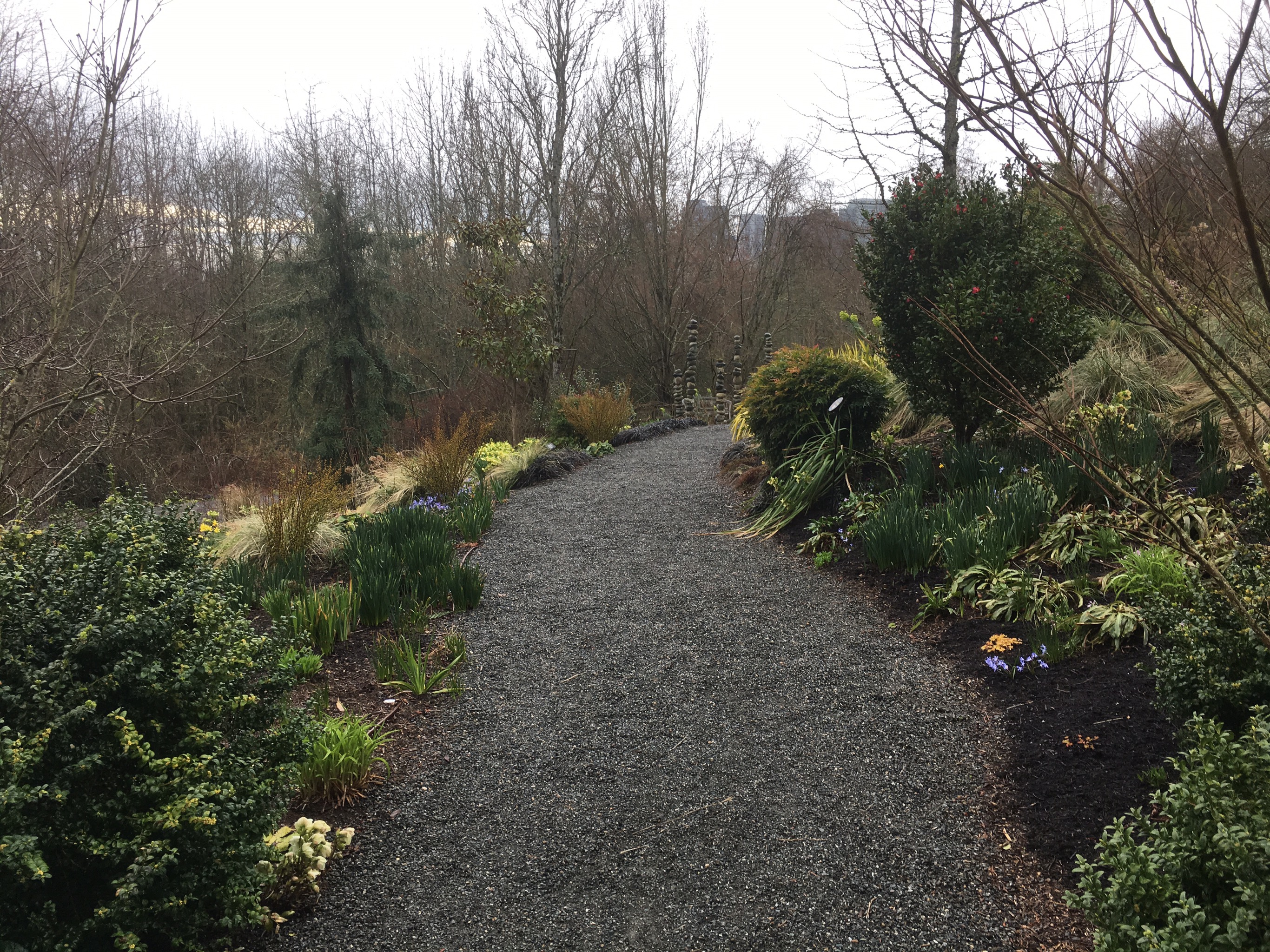 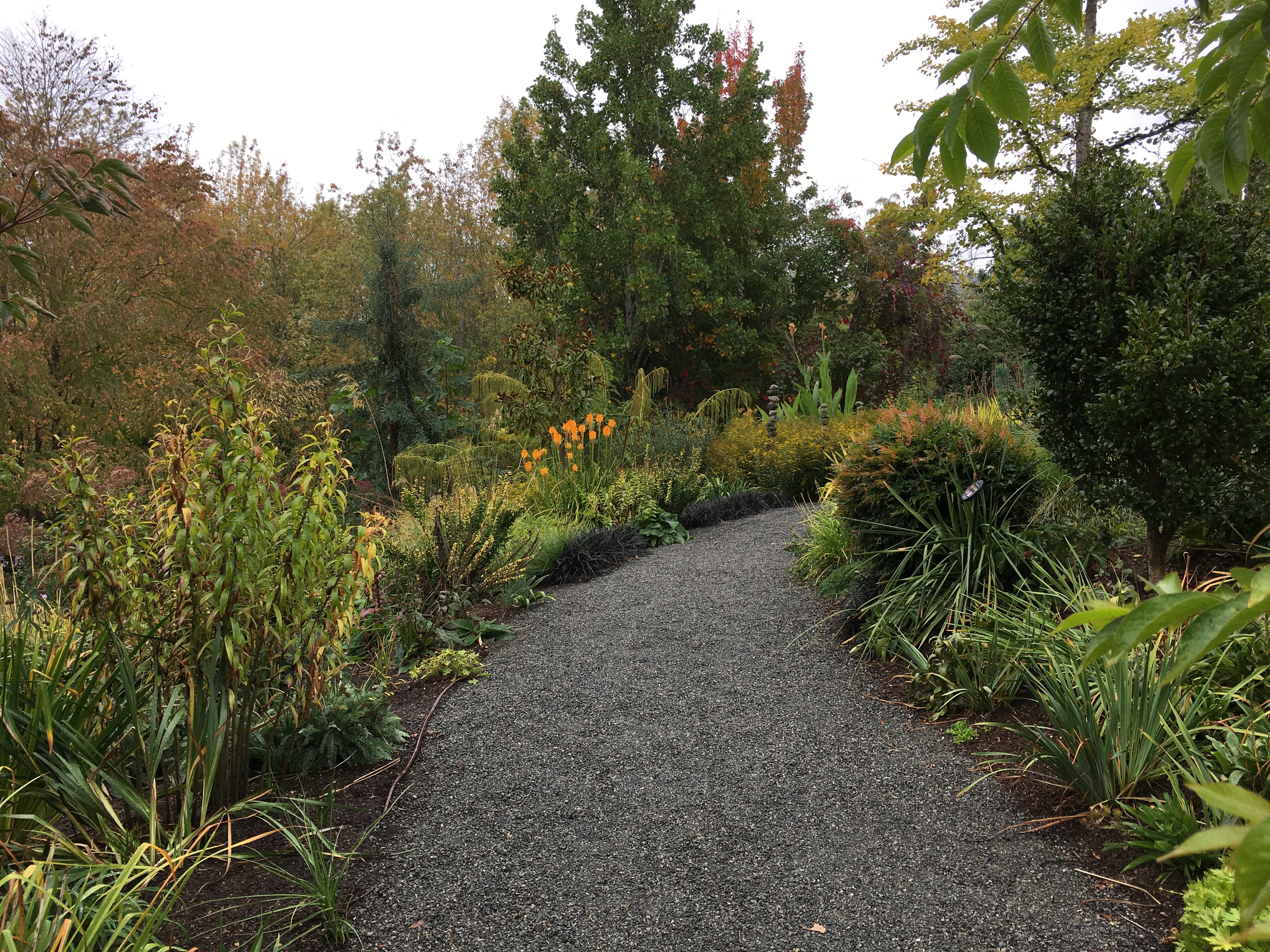 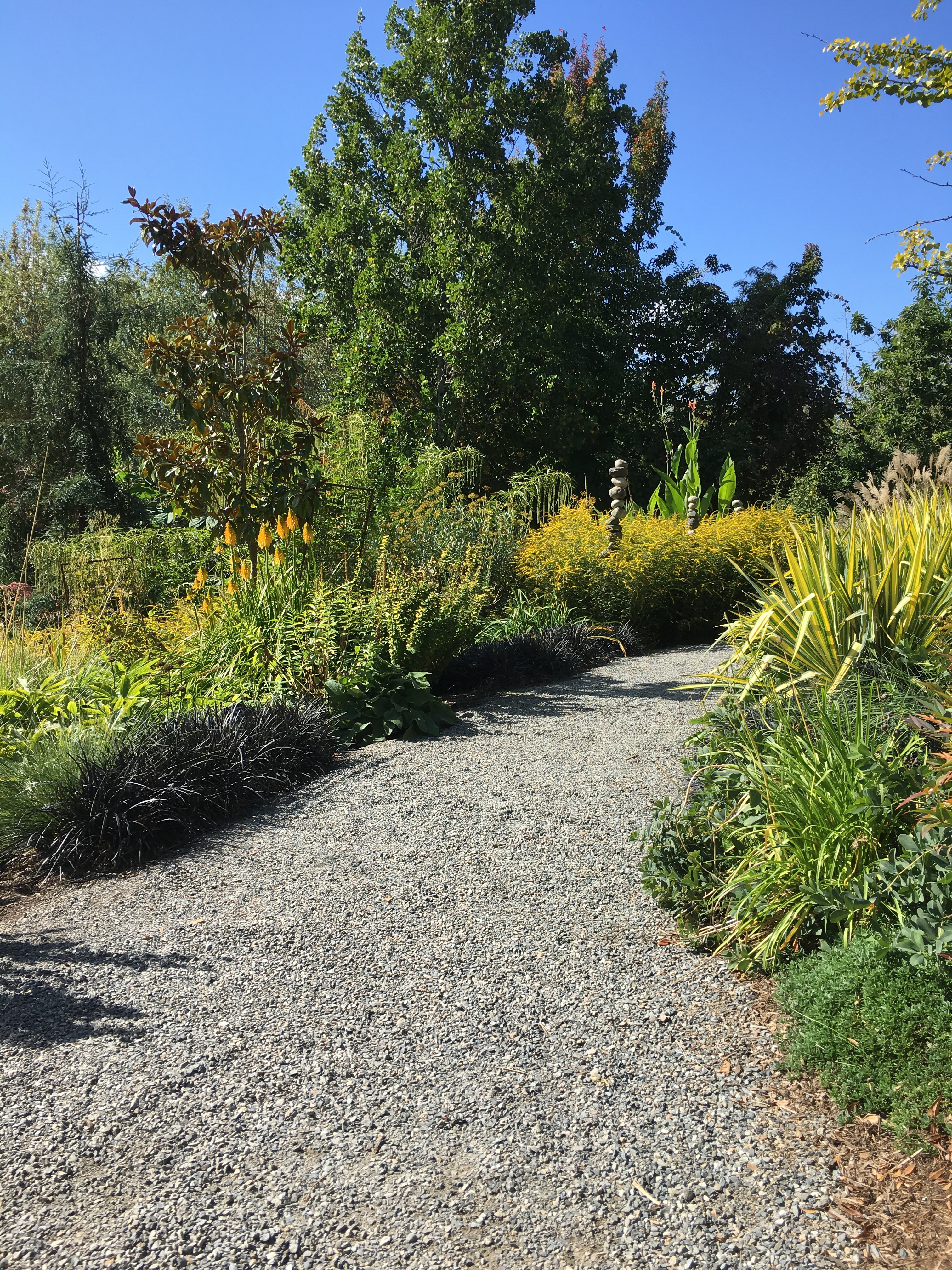 I’m not usually drawn to yellows and oranges, but I loved this space.  I’ve enjoyed watching its progress throughout the year.

I have this inspiration and this drawing… I just don’t have the physical ability to create any of it.  It makes me very very sad.  My husband is wonderful.  He saw that I was struggling on Saturday.  I told him my frustrations.  I said I’d at least like to landscape the area around the mail box.  If I start in one section I can work my way around the garden.  He graciously said we could go get the plant for that section and he would plant them for me.

Sunday afternoon he did just that.  I helped the best I could.  It involved me picking quarter sized weeds out of the ground and putting small rocks into a small nursery pot.  It was so nice to work outside.  However, I am paying dearly for it today.  I will admit I did too much yesterday, but not so much that I damaged anything.  My arms are painfully sore and sleep was incredibly uncomfortable last night.  If I had to do it all over again I totally would.  Only next time I would enlist the help of a few more people.

Who want to come help shovel some compost?  I’ll buy you beer.