We have owned our home for six or seven years now.  When we first looked at the house it didn’t quite occur to us that there was no door from inside the house to the attached garage.  It wasn’t until we went for a second look and finally got into the garage that we noticed something was amiss.  We thought it was strange that there was no way to get into the garage except for the large garage door, but lived with it because there was a bench built right in front of where the opening to the house should have been.  It wasn’t until about 2 years after buying the house that we learned the whole truth.

The previous homeowner, affectionately known as Dane the Dumbass Previous Homeowner, and his then wife had marital issues.  That would explain their following divorce.  I’ve mentioned Dumbass Dane before and it probably won’t be the last time.  The story we heard from the knows everything little old lady behind us was that Dane  got pissed off at his wife for not taking the garbage all the way out to the garbage can.  Instead she would put the bags in the garage and wait for Dane to take them to the garbage.  One weekend while she was gone he had had enough and decided to remove the door from the house to the garage.  To ensure she couldn’t put the door back in he built work benches in front of the opening.  Here is where we come in.  We buy house, decided re-installation of door is too much of a pain so we live with it.

For 6 years the only way to get into the garage has been to go out the front door, walk down the front walk, open the (nearly falling apart) garage door, try not to kill myself while getting to the back of the garage to turn on the light and then doing whatever needed to be done in said garage, reverse to re-enter the home.  Now imagine this during chocolate season.  I do all of that about 30 times a day mostly while carrying a tray of chocolate and heaven forbid it be snowing or raining.  Last year it was so cold during chocolate season that I would have to put on a parka and boots to make the trip.

This year our weather is supposed to be colder and wetter than normal.  That would be evidenced by the fact that it is 3 days before Thanksgiving and it is currently snowing outside.  When I heard the forecast I told Derek that enough was enough.  I wanted the door.  He begrudgingly agreed and Sunday afternoon we spent our child-free day doing a home improvement project, while it snowed.

Like most home improvement projects around here we anticipated the worst.  Wiring through the opening, a broken pipe behind the shelves, something.  The worst part was we broke a screwdriver bit because the screws were in so tight on the work bench and when we finally got the drywall off the garage side of the opening we found that Dane had used no less than 400 nails to affix 2x4s to the rough opening for the door.  But, 2 1/2 hours later we had a functioning door and we are still married.  We also did it all without a single beer.

I have spend the better part of the day going in and out of the door.  I go out to the garage to get tools, put tools away, get stuff out of the freezer, take chocolates in and out and sometimes I go through the door because it is just that awesome. 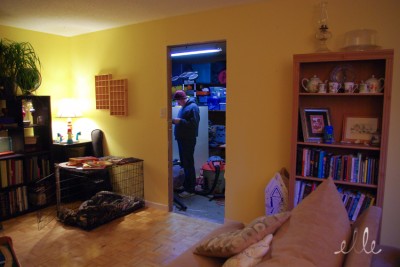 I will have it noted that he is actually reading the instructions on proper door installation in this photo. 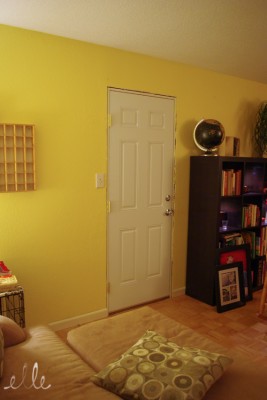 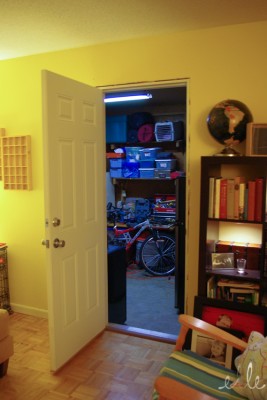 Of course I needed to rearrange the furniture and will need a new rug and maybe a coffee table, but the most important part… I have a door.  From my house into my garage!