Friday I had to drive down to our local hockey rink twice to find out what the deal was with the boy’s lessons.? I’ve emailed and called for additional information and got nothing.? So that morning I called again asking for someone to talk to.? Of course… no one there.? I was informed that the lady to talk to would be in shortly, but no one would be in to sharpen skates until after 3:00.? I decided to wait until there was someone there to do both things I needed done.? My child had other plans.? He decided to not nap causing us to not leave the house until 3:30.? This meant that the lady I needed to talk to wouldn’t be there.? And as luck would have it the child picked that exact moment to decide he now has to clean up every toy prior to leaving the house.? Catch 22?? uh yes.

We make it to the rink and find the skate sharpening guy.? Remember this rink is in an old refrigerated warehouse so they basically use the ambient temperature to keep the ice frozen.? Needless to say it’s colder than a witches tit in there.? So we find Pooh.? Swear to god that’s the guy’s name.? He sharpens the skates and I ask if the registration lady was around.? Nope.? She’s gone for the weekend.

Pooh, being the silly willy nilly ol’ bear that he is helps me out contacting someone to get the boy’s gear rented and find out how to register the child.? Trouble is, the lady won’t be in until 6:00.? So I have to come back.

We go back and the super nice lady helps us get the boy’s gear (most of which is too large) and gives me the info on how to register… online.? Duh.? Off we go new bag of gear in hand that is larger than my child. 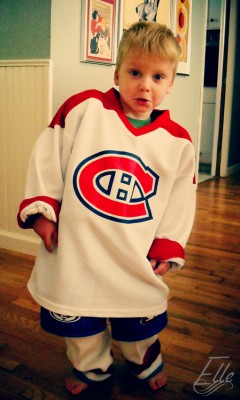 Saturday we figured that we should probably put the boy on those new single blade skates if he’s going to try lessons in a week.? We’re forward thinkers like that.? The trusty husband talked to PayPay and invited him and Kathou and Chickadee to go skating with us.? They happily agreed and we met at the Play-it-Again Sports in Lynwood where we purchased hockey pants that fit a small child, a miniature hockey stick, super small knee pads and world’s smallest jock (now named “the banana”).

We finally made it to the super nice hockey rink and the boy was “so excited to skate.”? Or so he continually told us.? That is until he got out on the ice and would only hang off of our arms while we dragged him around the ice.? PayPay brought us a walker which the child was unsure of and then downright hated when he fell on his bum and bumped his chin on the (padded) cross bar (he was wearing a helmet).

It took a good 2 hours of starting and stopping, lots of crying and me trying not to channel my inner Joe Kinney* for him to get the hang of if.? After a while the boy felt he no longer needed his parents’ assistance and dismissed us from his presence.? His exact words were, “you go now.” 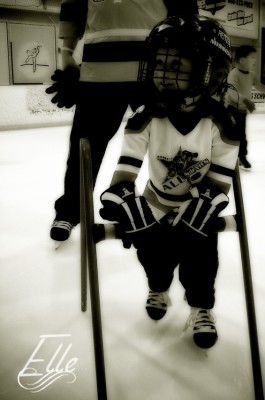 So the child has skating very slowly with the assistance of a skate walker down pat.? We’ve informed him that come next Saturday we cannot go onto the ice with him nor will he be given a walker. He assures us that he now knows how to skate and can do it himself.? He just wishes he didn’t have to wear the jock.? “It’s itchy.” 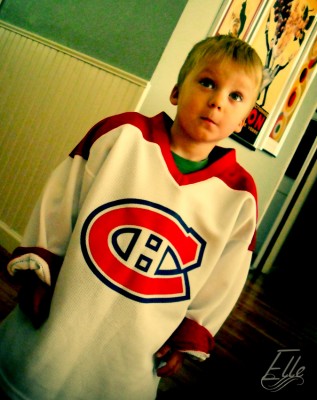 *Joe Kinney is my father and despite being athletic is the single worst person to teach any small child a sport.