New Year’s Eve tops my list of least favorite holidays. ?Considering I’m in bed by 10:00 most nights that shouldn’t be surprising. ?I despise the holidays that force you to stay up late just for the helluvit. ?My loathing of NYE is on of the major motivating factors in having a child. ?”Oh sorry, we can’t go to that party. ?We have a kid and all.” ?Second on the list of least favorite holidays would be 4th of July. ?Same reason. ?It doesn’t get dark until quite late here in the summer.

In the 13+ years we have been married the trusty husband and I have never done anything thrilling for New Year’s Eve. ?We’ve hosted people, go to family or friends, but never gone out to a big party. ?When I heard that CAKE would be playing in Seattle on NYE I had to go. ?HAD TO GO. ?I did not care that the concert was on a night that would 1) force me to stay up waaay past my bed time, 2) get an overnight babysitter for the boy (thank you grandparents) or 3) go into Seattle on NYE. ?Didn’t matter at all.

You know what… that was the single best New Year’s Eve I’ve ever had in my life.

We started the evening at Serious Pie, Tom Douglas’s pizza joint just around the corner from The Moore. ?Ranks right up there with the best pizza ever. ?After dinner we had about an hour to waste until the doors for the show opened. ?We wandered to the mall to find out it was closed. ?We spent the next hour searching for at least on open store so we could pee. ?Luckily Macy’s delivered. ?We walked back to The Moore (during the bumming hour) just in time. ?Doors opened and we hit the Palace bar for one last drink. ?Drinks done we took our seats.

The usher informed us we were in row X (duh I can read) and we hiked our happy asses up the stairs. ?We didn’t quite have the furthest seats from the stage, but pretty darn close. ?Did I care? ?Hells no. 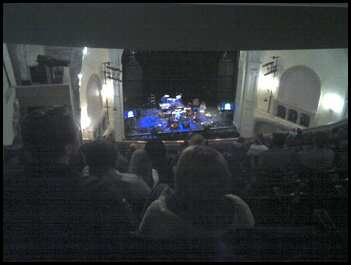 Yes, I took that with my cell phone because the Nazi usher went around every 5 minutes yelling, “NO PHOTOS!”

King City opened the show with a set that made the trusty husband come home and buy their album. ?They were good. ?The next act was a dude with a box and a microphone and a lady doing interpretive dance. ?I am supposing this act was da bomb if you were lit. ?I was not. ?The following act was a local band that was so good that I don’t even remember their name. ?Then somehow someone thought it would be a good idea to bring back the dude with a box and now there were two chicks doing interpretive dance. ?By this point I was getting tired since it was my bed time.

Cake finally FINALLY took the stage at 10:30 (the show started at 8:00). ?They opened with Comfort Eagle. ?It was amazing. ?AH-MAY-ZING! ?I’m going out on a limb to say that this concert rivaled the U2 Pop Mart show in my book if not surpassed it. ?We rung in the new year at The Moore and the band finished the show with Jolene. ?I could have watched them play for the full 4 hours.

When we left the theater Seattle was a blur of sirens and drunk people. ?It took us over 30 minutes just to get to the freeway. ?We finally made it to bed around 2 a.m. and I was up with the dog at 6:30 this morning. ?It’s going to be one long day.

I realize that many people don’t know who CAKE is. ?Their first album was out in 1994 (which I just bought this year). ?The first CAKE album I purchased was in 1996. ?I’m not even sure how I heard of them. ?Looking back, none of the songs on that album were huge hits. ?What most people do know is the theme song to the TV show Chuck. ?That is a CAKE song, Short Skirt, Long Jacket. ?Here are a few CAKE videos to let you in on what I’m going on about. ?What is it that I like about them? ?Catchy tunes and lyrics that don’t seem to make sense. ?The combo is great.