Saturday was day 3 of the themeparkpalooza.  The child woke up in yet another foul mood and I’d had enough of it.  At the time he thought of nothing but himself.  Part of that was because the last time we were in Disney it was all about him.  However this time there were 7 other people he needed to think about.  That’s a tall order for a 6 year old.  I knew that, but it was no reason for him to be such a crap head.  He and I got into it that morning about his behavior.  I laid down the law and said that the behavior would not be tolerated, we would not go to Disney until he calmed down (there was much screaming and gnashing of teeth) and eventually I locked myself in the bathroom.  Once he calmed down I said that if he pulled that again we would leave Disneyland.  There were no warnings this time.  I’d had enough.

Saturday morning we had reservations at Goofy’s Kitchen for breakfast.  I’d read wonderful things about how the chefs will go out of their way to cater to ceiliacs.  We had informed the kitchen prior to our arrival and they were ready for us.  I was able to have the best gluten free Mickey waffles and they even got me fresh sausage that hadn’t been in the pan with the bread that soaks up the grease.  The only disappointing thing was that there were only 4 characters at the breakfast.  When we did the Minnie breakfast we saw at least 7-10.  The lack of characters made the kids sad, but the boy was able to eat his weight in food.  I was also able to pocket a few bananas for a food emergency. 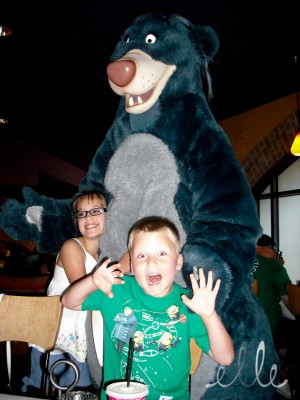 After breakfast, as promised, we went straight to Toon Town.  Oh how I loathe Toon Town.  It is crowded, hot and boring.  The best part was we decided to ride the Gadget Go Coaster.  Once again I had to coax the child onto the ride.  He rode with his father, B elected to ride with her dad which left me and Gretchen to ride together.  When it was our turn to ride Gretchen and I looked at this thing and wondered how the hell we were both going to fit into the seat.  They are very small seats made for 2 kids or an adult and a small child.  It certainly was not made for two grown adults.  Somehow we managed to cram our asses into the seat.  About half way up the first hill we looked at each other and said, “How are we going to get out of this thing?”  We then proceeded to laugh our asses off the rest of the 20 second ride.  We didn’t laugh them off quite enough because at the end we were certain that we would just keep riding the ride all day long because they wouldn’t be able to get us out.  Fortunately we got out, not sure how.

After lunch the family decided that we were going to ride the Haunted Mansion.  Yet again the boy freaked out about not wanting to ride it.  Instead of nicely saying that he didn’t want to ride it he pitched a fit about nothing demanding that we go back to Toon Town and then demanding that we ride Pirates instead.  I kindly informed him that we would ride Pirates after the Haunted Mansion, but it was B’s turn to pick and this is what we were doing.  Once again, it’s not all about you child.  This was the moment that the child decided to pitch a royal fit as we were walking into Adventureland.  Remember my threat earlier in the day?  The one that said if he was a crab we would leave the park.  That was the moment that I became “that mom.”  I informed him that we were leaving.  I walked over to the family and said, “Oleg is choosing to throw a fit so we are now going to go sit outside the park.  I’ll text you when we are ready to come back in.”  I held tightly to my son’s hand and walked away.  He then turned into a cartoon character yanking my arm and not walking as I pulled him down the sidewalk.  As we walked down Main Street he was blaming me for his behavior, telling me that I was ruining his vacation.  I marched him out of Disneyland and over to a bench where he continued to cry and berate me.  Want to get the best photo of the gates of Disneyland?  You have to do it in the middle of the afternoon.  Look. 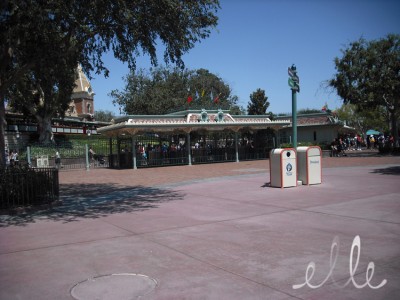 However, if you’re sitting outside the gates of Disneyland in the middle of the afternoon this is probably what’s on the other side of you. 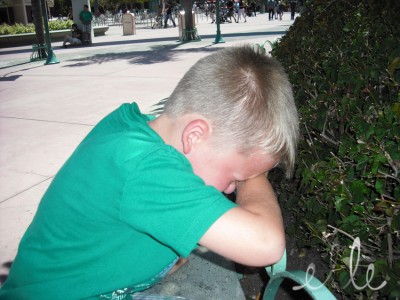 A good 20-30 minutes later and a lot of me trying different tactics to make the child understand his actions I finally found one that stuck.  I asked him to really think about his behavior and when he was ready to calmly talk to me about it and apologize I would talk to him.  I then handed him a bag of cashews and ignored him.  5 minutes later he looked at me and said, “mom, I’m ready to apologize.”  He explained his actions, said he was sorry and politely asked if he could go back to Disneyland.  I agreed and we walked hand-in-hand back through the gates.  While we were walking he looked up at me and said, “Mom, I’m going to be more respectful now.”  My heart just about melted.  I was so proud of him for recognizing his actions, acknowledging them and apologizing.  I told him that we would do something special because he showed me that he could be so kind.  Part of me was thinking that I really shouldn’t reward his behavior, but I wanted to reward the good behavior.  I gave him the option.  He could ride Pirates (the previous deal was he couldn’t ride Pirates unless he rode the Haunted Mansion because that was just his way of getting what he wanted).  So he could ride Pirates or we could go to the Mad Hatter and he could pick out a new ear hat.  He chose ear hat.  My boy and I went to the ear hat store, picked out a new ear hat for him and had his name embroidered on the back.  I told him that this was an anti-crabby hat.  As long as he was wearing Mickey ears he couldn’t be crabby.  Why oh why didn’t I think of that sooner?  The child was perfectly behaved the rest of the time in Disneyland.