After not sleeping and freezing our asses off all night we gave up and got moving.  The original plan was to get up at 6:30 to be on the road by 7:30, but we were up at 5:30 and out the “door” at 6:15.  Because I couldn’t wash my face or brush my teeth I was already feeling not so hot.  We also couldn’t make coffee because we didn’t bring our camping stove with us and weren’t about to try building a fire to heat water.  We set off down the mountain road (sans clean teeth or coffee).  This is the point where we were able to see the giant forest, while the child had his nose once again buried in a movie.  Somehow he was unimpressed.  Half way down I was starting to get rather motion sick and Derek asked me if it was better if I drove.  Aw hell no.  There was no way I was going to drive down that mountain.  We made it out and beelined for the closest Starbucks.  Praise you GPS*.

We brushed out teeth, had a little coffee and shoved some food into the child’s face and set off towards the happiest place on Earth.  I say praise you to the GPS because in an 11 day road trip it never got us lost and was quite accurate on calculating time.  However, it did take us on some interesting roads.  For the most part we drove backroads from Visalia, CA to Bakersfield, CA.  It was slightly serene driving through vast farmland.  That is until we started in on the oil rig farms.  Nothing like fossil fuel farms to make you weep just a little (as we’re driving a small SUV).  Oh the irony.

Then, once we got into LA, it kept recalculating for traffic and we kept following the fastest route.  At one point we were in Glendale and then back on the freeway headed toward east LA.  At that point we decided we were going to invent a new and improved GPS with an “anti-ghetto” feature.  We could make millions.

We grabbed a quick snack and headed into Disneyland.  We were nearly greeted at the gate by Princess Ariel which delighted the 9 year old niece.  In honor of Mom we rode the train around the park, but before we did we snapped photos while waiting. 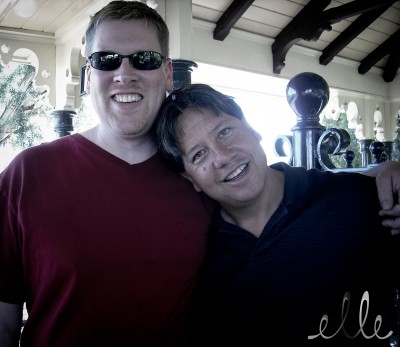 Derek and the trusty brother-in-law are a force to be reckoned with when they get together.  It is a constant stream of bad jokes.

Two nights before we had watched Cloudy With a Chance of Meatballs and Derek was just acting the part. 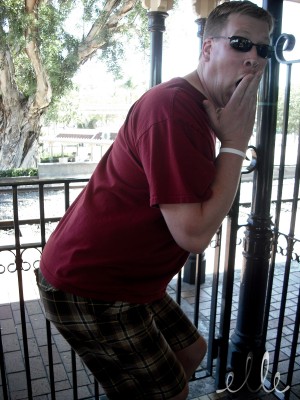 Of course his son was not to be outdone. 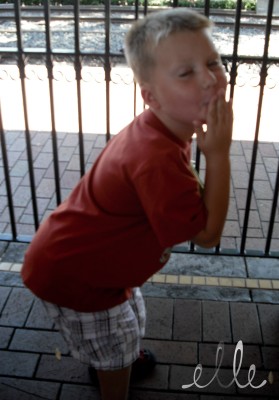 Prior to leaving the hotel I told the trusty family that the child has been eating everything in sight.  If for some reason he gets cranky just shove food in his face.  It was a great plan, everyone was briefed, it was all going to be fine.  It was fine up until the point where we were waiting in line to ride Pirates of the Caribbean and the boy started to panic and his mother forgot to load her bag with snacks.  Not only was the child hungry (we had dinner reservations for 10 minutes later), but he was scared to ride the ride.  The ride that he asked to ride.  The ride that he rode 3 times in a row back in October.  So we did what we always do when we know he’s going to have fun but pitching a fit about it.  We shoved him on the ride and lo and behold he had fun.  Shocking.

We made it to the restaurant (The Blue Bayou) at our reservation time only to be told they thought we would be there 20 minutes earlier.  There was some confusion about what time the reservation was made for.  Needless to say they still seated us and I was able to have a wonderful gluten free dinner complete with rolls.  Oh how I miss rolls with dinner.

It was a short day at Disney, but enough to get the kids excited about the next few days to come.  It only gets better from here… or does it.

*The GPS and my phone were our best friends on the trip.