Thank you all for advice.   We figured out the issue.  We think he’s getting 6 year molars.  If you remember molars and our family don’t mix.  Let’s move on shall we?

At the asscrack of dawn on August 2nd we set out for what we later dubbed Adventurecation.  The plan was for it to be an 11 night road trip that took us through Sequoia National Park to Disneyland to San Diego and back up the California coast.  This wasn’t the vacation we originally intended last year.  We went to Disneyland last Fall for the boy’s birthday.  However, a week after booking the previous Disney trip Derek’s aunt organized a family reunion.  Thing was… they live in Southern California.  About 15 minutes from Disneyland to be exact.  We figured that if we were going back to Disney, and driving this time, we would take our time and make the most of it.  It sounded like a good plan.  For the most part it was… except for that time that I wanted to jump out of the car in Vacaville, CA.

We were up late on the 1st preparing for an early departure the next morning.  I had a carefully orchestrated plan of packing and loading the car and being in bed by 9:00 so I wasn’t a complete and utter crank at 3:30 a.m..  By the way, whomever invented 3:30 in the morning should be shot.  Apparently writing things down on a piece of paper wasn’t good enough for the organizational overloards because at about 5:00 my husband came home and promptly started taking the front part of my car apart.  What the hell?!  Those organizational overloards gave us the big middle finger and a headlight had burned out.  Hey we still had one.  Wasn’t that good enough?  Dammit, I should have made an Excel spreadsheet.

We get the car packed, fall into bed only for the alarm to go off at 3:30 a.m..  I really have to find that guy and kick him in the nuts.  At 4:15 we get the kid out of bed, throw some clothes on him, stuff him in the car and off we go… only to make potty stops every hour until south of Portland.

The first day’s plan was to drive to Sacramento and stay the night with Derek’s sister. Plan accomplished.  We rolled into Sac-town at about 5:00.  So far so good.  The next morning was the first in Adventurecation.  We made it to Sequoia relatively early in the day (3:00 in the afternoon).  The northern part of the park is beautiful and the child had his nose buried in an iPod.  I made him take off the headphones and put away the iPod because gosh darn it we drove all this way so HE could see really big trees and he was going to enjoy it.  Never mind the really really big trees are in the southern part of the park, but we are going to enjoy this family road trip moment.

We made it to the campground and after yet another potty stop at the visitor’s center we were ready to check in.  The park ranger informed us that we were staying in a very active bear area.  I was aware of  bear activity considering one of the highlights of the campground are individual bear boxes.  She briefed us of all proper bear protocol.  There were things like clear every scrap of food out of your car and put it in the bear box.  All toiletries must be removed from the car and put in the bear box.  Remove the child’s car seat from the car and set it outside of the car.  Don’t wash dishes, brush your teeth or wash your hands at the faucet at your site.  All grey water must be dumped in the bathroom, but oh we should probably mention that the restroom near your site is under construction so you have to hike your grey water down the hill to the other bathroom to dump it.  And if you need to use the bathroom there are two porta-potties nearby.  Have a nice time and don’t get eaten by bears.

Determined to not be scared of bears we followed every last bit of her advice and I strongly warned the boys that they were to not get a single dish dirty.  That worked out well.

Once we had camp set up we were off to see “the big tree.”  The scenery was beautiful.  There is something about being in the woods that is magical to me.  I love it.  We walked down the path to the General Sherman tree and holy hell is it ever huge.  The last time I saw it was about 17 or 18 year ago.  They’ve made considerable improvements to the park and we had a nice time.  It wasn’t too busy and we were able to get a shot of the boy with the biggest tree in the world. 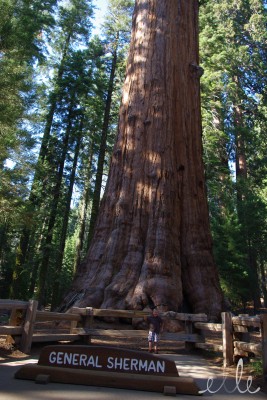 After not quite a national lampoons moment at the General Sherman tree we headed back to the campground for dinner.  We also discovered that there was a beautiful river that ran through the campground.  We hurried through dinner so the child could explore the rocks and water.  That was the point where I said I could stay there forever.  Part of me wish we had.  crawling on large rocks in the middle of a river brings back childhood memories that are so precious to me.  One night in Sequoia was not nearly enough. 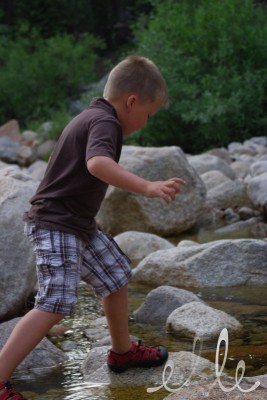 The boys made a quick potty stop and I took a moment to do one of my favorite activities.  I built a small cairn in the middle of the river. 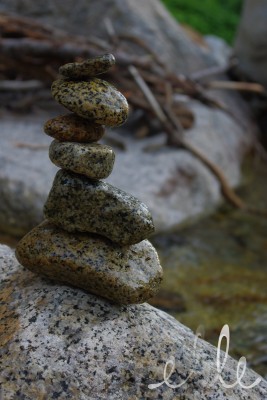 That night we put the boy to bed in the tent and we watched an episode of Mad Men on my laptop (not exactly roughing it).  A few minutes into the show we heard, “Dad, Daaad,” from the boy.  He informed his father that the nearby waterfall was keeping him awake.  Sorry buddy, can’t turn that off, and he told him to go to sleep.  After our show we got ready for bed and as I walked to the porta-potty I looked up and saw the most beautiful thing I’ve ever seen in my life.  Every star in the sky was shining against a deep black sky.  I’ve never seen so many stars in my life.  Derek came back and said, “did you see it?”  See what?  The Milky Way.  Sure enough.  With that we crawled into the tent only to not sleep because the ground was hard and wow that waterfall really was loud.  Did I mention it was cold in the mountains?