At some point last year we took the boy to his first Mariners game.  I could swore I wrote about it.  Maybe I just put photos on Facebook.  I can’t remember anymore (and a quick search of the archives resulted in nothing).  Anyway, we did.  The whole family went.  Even Mom and she didn’t really like baseball games.  About half way through the game the boy announced that he wanted to play baseball.  In my husband’s world the skies opened up and angels sang the hallelujah chorus.  You know that scene in “How the Grinch Stole Christmas” where the Grinch’s smile went ear to ear (but in an evil way)?  Yeah, that happened.  I’ll tell you about the time the boy announced he wanted to play soccer another day.

So here we are in August and the child wants to play baseball.  Ok.  I’m not opposed to sports that aren’t hockey.  I’m willing to let him try whatever he wants.  Hell, I nearly signed him up for ballet classes a while back.

We told the child that he had to wait until the Spring to play baseball.  He was none to happy about that and proceeded to pester me about playing baseball for the next 7 months.  When the paperwork came home from school about t-ball sign ups I told him it was time.  Of course I didn’t get him signed up until the very last day (which is yet another story).  I got an email from the coach that t-ball practices started on the 19th.

One very proud Papa drove up to Tacoma last week to take his grandson to purchase his very first baseball mitt (and ball, and bat and T).  The child then proceeded to play in the front yard with new baseball equipment.  This was all looking promising.

Yesterday was the 19th and at breakfast I reminded the boy that it was the first day of t-ball practice.  “Oh yay!” he said, sounding very excited.

He played with the neighbor girl most of the afternoon.  We thought it was best to give him a snack before practice since it happened to fall right at dinner time.  I knew something was up when he started poking about at his food.  We got the snack into him and then I asked him to go potty and put sweats on.  To which he tried to argue with me and generally be a pain in the ass.  I knew exactly what was up. 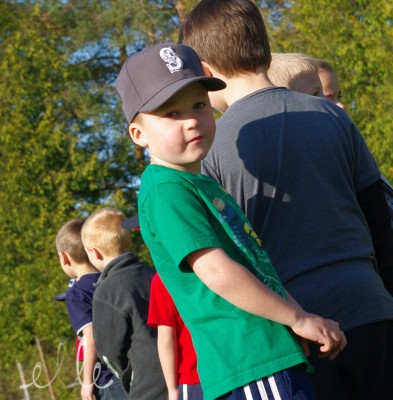 As we got in the car he stalled.  We drove to the school and waited for a bit.  The boy played Angry Birds and when we said it was time to go he pitched a fit. 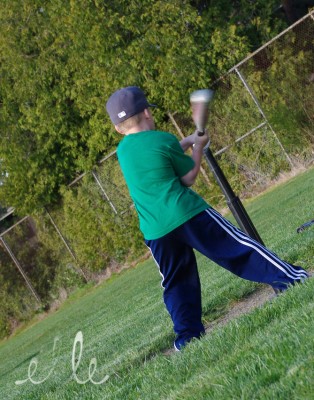 Have I mentioned how much my child dislikes new stuff?  He will do anything and everything to get out of new situations.  He stalled eating so that maybe we’d run late and not have to go.  He was a general pain in the ass so that maybe I’d threaten staying home if he misbehaved.  Not going to happen my little 3′ friend.  This was his idea.  When we got out of the car I said, “I know you’re nervous…”  At that the child started crying.  Fortunately Derek was able to calm him down enough to go to the baseball field.  This time it is different.  Daddy isn’t a coach.  Daddy isn’t allowed on the field.  It was all him.

To the child’s credit he was quite a trooper.  All of the kids are at about the same skill level when it comes to t-ball (with the exception of the coach’s son of course).  They got to run the bases, throw the ball, practice fielding grounders and finally take a few swings.  While running the bases Oleg looked back at us and said, “this is actually kinda fun.” 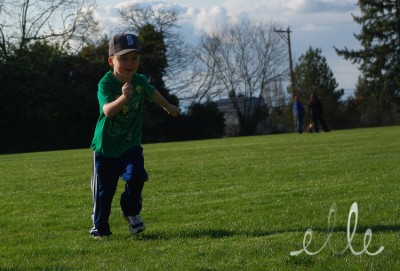 Of course it is child.  Just be more athletic than your mother m’kay.