If you will recall a few weeks ago I asked your opinion on adopting some four legged furries.  You all had wonderful things to say, but I will admit that I had my mind made up before we left their foster house.  It was a matter of convincing Derek of the decision I had already made.

Let me introduce the newest members of our family… 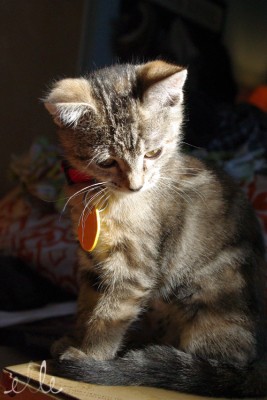 This is Fiona.  And at that my good friends Jenny and Kevin are saying, “dude seriously?”  Their daughter is named Fiona.  I should say that the kitties came with names.  We have been considering changing them, but their foster mom does an amazing job of naming her charges.

Little Miss Fi was the smallest of the Lively Bunch.  She was the last to cross over the 2 pound mark.  She is just a wee little peanut, but being the only girl in the litter what she lacks in size she makes up for in personality.  She is a feisty one, but the first to snuggle.  She spent most of the night sleeping next to my pillow. 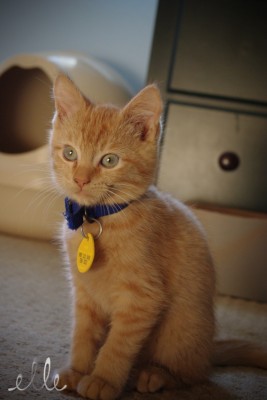 This is Irving.  I can’t resist an orange kitteh.  Contrary to Julius, there isn’t a speck of white on him.  He is all orange, but with blue eyes.  Ok, on most occasions his eyes are blue.  He is much bigger than his sister.  The small human has claimed this cat to be his own.  His is the name we are waffling on.  I don’t want to rename him, but for some reason he doesn’t feel like an Irving to me.  That makes me feel sad because his foster mom takes such care in naming the kittens.  He looks like a Hammond to me, but we’ll wait to see if that is true or not.  Irving is a fluffy little lad.  He is cautious, but can be quite a little instigator. 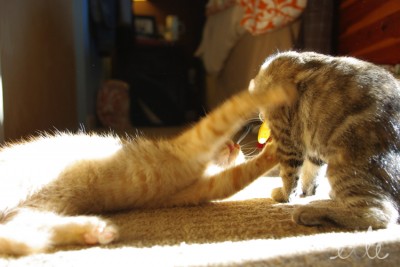 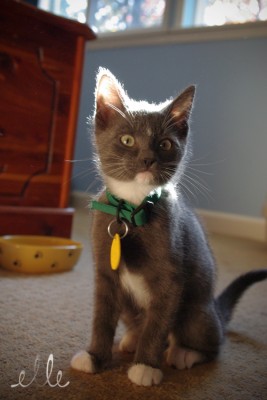 Oh, and this is Truman.  Yes, we decided to get all three babies.  We knew we wanted two, but couldn’t stand the thought of leaving one behind.  So we decided on all 3.  When I met Truman I thought his name might be Livingston.  However, I he has dispelled me of that notion and his name is, in fact, Truman.  However, if this cat had a voice he would most certainly speak with a British accent.  He is Mr. Curiosity.  He is the first to come out from under the bed to greet us.  He also has a large appetite and spends a good part of the day with his head in the food dish.

The boy and I picked the kittehs up yesterday afternoon.  They seem to be transitioning quite nicely.  The slept in between Derek and me through most of the night and today are their playful little selves.  Busy has yet to meet them, but is rather curious what is behind door #1.  We’ll hold off on a formal introduction for a few more days.

Where did the kittens come from?  Technically they are humane society kitties.  Their foster mom is Laurie and she writes a blog called The Itty Bitty Kitty Committee.  This is where I found them.  She has a wonderful sense of humor and takes the most amazing photos.  It wasn’t hard to fall in love.

Welcome to the family Livelies.  We hope you like it here.