The last time I had my hair cut and colored was early October.  I was somewhat happy with it.  The color faded a little too quickly and I never had the time to get it done again.  Because this happened.  For the past 6 months I have not made the time for myself.  When a Living Social deal came up for a salon in town I bought it with the intention of making an appointment.  Then this happened.  Then this happened.  Needless to say getting my hair cut has been very low on the priority pole.

Last week I couldn’t stand it anymore and I called the place I bought the Living Social deal from.  A stylist answered the phone and I explained that I’d had the same stylist for ever and wanted a fresh pair of eyes and have no expectations.  She said she had an opening Monday.  I took it.

I had an appointment for work early in the day and then about a hour and a half to kill downtown until my hair appointment.  I got myself a coffee, wandered the University Bookstore, stopped by a local gift and jewelry shop and bought myself 4 new fabulous rings, quickly browsed through the used clothing store (where no one ever greeted me) and then I headed over to the salon.

The stylist was super friendly, wasn’t afraid to give me suggestions and I was totally an open book.  I went with it all.  When the cut was finished I was not overjoyed with it, but I wasn’t disappointed either.  My hair had grown to past shoulder length and was fairly even so the curls looked nice on the ends and not stringy.  I hate stringy curls.  This stylist used a razor and layered it and then thinned it.  The last stylist said you should never thin naturally curly hair.  My old stylist always thinned my hair.  I’m so confused.  In any case I loved the color.

When I got home I tweeted

Not more than 10 minutes later I get a facebook message from the lady who did my hair.  I quickly panicked thinking that I was friends with her on Facebook or she followed me on twitter.  I slightly delayed mental inventory (did I mention I walked in the door and poured myself a glass of wine… at 2:30?) showed that odds are she hadn’t read my review.

Here’s what happened and how I am currently getting screwed out of $50.

I bought the aforementioned Living Social deal.  Since I work for a small local business (who is getting ready to run a Living Social deal) I know a bit about how the process works.  It can be a great thing if it is done properly.  It can really suck if it isn’t.  I’m also very cautious to always read the fine print when buying a deal like that.  I am married to a cheap Swede who likes deals but hates losing money.  The deal was $50 for $100 of services.  It didn’t have any extraneous fine print, nor did the salon’s website.  I made my appointment, didn’t mention the deal because I assumed it was good for the whole salon (since there was no fine print indicating otherwise).  I get to the front counter to pay and the owner of the salon just so happened to be standing there.  I mentioned that I found the salon through Living Social and proceeded to pull the deal up on my phone.  My stylist was sitting there with this confused look on her face and said, “what’s Living Social?”

The owner then proceeded to tell me that the deal was only good for two of the stylists in the salon.  Of course mine wasn’t one of them.  My stylist… still totally blank on the deal.  Another girl asked if I bought the deal.  I said yes.

Owner still, “only good for two of the girls.”
I showed them the fine print… no indication of that.
Owner: “well, usually when people call we ask them if they have a deal and we set them up with one of the two.”
Me: “no one asked me.”
my stylist: “well I answered the phone and set up the appointment and there was no mention of it.”

Again, I didn’t think I had to mention it since there was nothing indicated in the fine print. The stylist I saw was new. New to the salon and new to town. If she wasn’t cut in on the deal she wouldn’t get the Living Social portion if I pressed the matter. So I paid the full amount. At that moment one of the other girls (who apparently was one of the “deal” girls) walked up. The whole thing transpired again.

deal girl: “well, they wouldn’t let us put that in there about it only being two stylists.”

That is a total load of horse shit. Like I said, our store is getting ready to run a Living Social deal (you should totally buy it if you live in Tacoma) and we know that we can put whatever we want in the fine print. I know because I asked the sales rep. This chick up and lied to me.

Needless to say I contacted Living Social for my money back. If they don’t do it I’m contacting the salon.

I also regret putting something out there about a hair cut fail. I later took a shower and styled it myself and actually like it. The color is awesome. It is going to take getting used to since it feels so thin, but it will be good if the weather ever warms up. 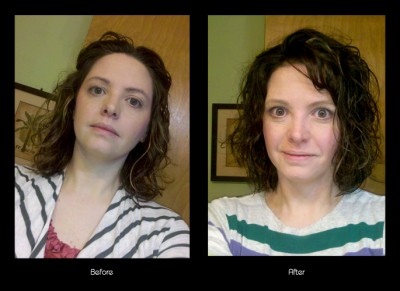 **Just so you have a proper hair post here are the before and after.  I wanted to do a better photo, but I tried to wear it somewhat straight yesterday, but that didn’t work out exactly as I wanted it.  What I love about it is the color.  The highlights are perfect, the color is beautiful and at the moment I don’t have to wear it up.

Will I go back?  I’m not sure.  I really like the stylist.  I mean really do.  What I don’t like are the other girls at the salon.  We’ll see how this all plays out.