I’m going to mention that I wrote a post about a chicken coop here and then cross post this post there tomorrow.  I’m confused… are you?

This year I thought I would take a chance and try growing my tomatoes from seed.  I tried it last year, but I started them in the unheated greenhouse late and my germination rate was a little lackluster.  I wanted to grow 10 different types of tomatoes (one of each color).  I purchased my seeds from Baker Creek Heirloom Seeds and planted them in February.  I didn’t want to do just one seed of each because what if it didn’t germinate.  So I planted at least 12 seeds of each (2 seeds in each cell of a 6 cell pack).  The majority of them germinated.  I’m not one to throw away seedlings so I potted up the best of what came up into 4″ containers once they were up to size.  They got moved into the greenhouse and then I potted up those into gallon sized containers once they were up to size.  In the end I came out with 42 tomato plants.  I only wanted 9 from what I grew (I had to buy a tomato plant since I couldn’t find seeds for that one).  That meant I had 33 tomato plants to unload.  Since my dear friend Rai has been watching Oleg this Spring she got to take home what she wanted.  I still had plants left.  I decided that we should try selling them.  The idea was to make extra money to go toward our chicken coop.  It would also be a good lesson for Oleg about business.

Last Tuesday the weather was supposed to be quite nice so it was as good of time as any to sell some plants.  While he was at school I headed to the mega home improvement store to purchase some “marketing” material.  I bought 2 2’x2′ pieces of plywood and a large piece of wood-like material to make signs.  I painted the plywood with “Organic Heirloom Tomato Plants $5.00” and made it into a sandwich board.  When Oleg got home from school he was so excited to start selling “his” tomato plants.  He’s been saving his money to buy an iPod touch*.

We walked the sandwich board up to the main street and came back to set up our shop.  On our walk we talked about the most important aspects of owning a business (marketing, customer service and merchandising).  Shortly after setting up our neighbor went by to get Oleg’s friend off of the bus.  On the way back he stopped and purchased 4 plants from us.  Oleg was $20 closer to his iPod and had a feeling of satisfaction.  His friend stayed for a while to help him sell plants and they sold another all by themselves.  She had to go home and I sent Oleg in to get a snack.  He came out of the house bent out of shape.  He claimed that there were no snacks.  Not true.  I sent him back in and out he came with a snack.

I was cleaning up the front patio and came around the corner to find my child crying (there’s a shocker).  I asked him what was wrong and he said, “I’m having a very bad day,” in the most dramatic tone my child could muster.

We had a conversation and it came out that he had expected people to flock to his little tomato stand.  I had to explain to him that’s not how it worked.  He was so sad that people wouldn’t want to buy his plants.  It broke my heart.  After a bit I got him calmed down and at that moment 3 people showed up to buy plants.  Of course they were more interested in talking to me, but they gave Oleg the money and he put it into his treasure box.

His take for the day ended up being $55.  I sold 2 at a meeting I’d had that morning and the lady picked them up while we were at dinner.  I’m so proud of my little guy.  We still have a few plants to sell.  If the weather gets nice I might see if he wants to put up his stand again. 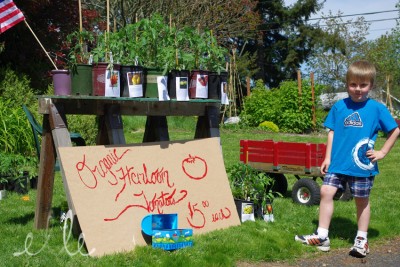 I drew the sign in pencil and then he painted over it.  The little lunchbox is his “treasure box.”  And in true Oleg fashion his store had to have a flag.

*Yes, I would allow my 6 year old to have his own iPod touch under the conditions that 1) he pays for it himself 2) he must follow all of my rules once he gets it (homework must be done first, it must be put away when told, there is no crying over it, he must purchase his own apps and it will be taken away for not showing nice behaviour toward his friends or family).