This morning I woke up to horrible depressing rain.I didn’t mind the snow, the slush I could do without, but this rain… I think it might kill me.

Yesterday a family member got bad news. It isn’t my story to tell, but lets just say it sucked.

I had to pick up a few things at the grocery this morning to finish up the freezer meals I’ve been working on. While I was out I met the husband at the bank because we needed a piece of paperwork notarized. While there I deposited my paycheck. The balance, according the receipt, was significantly less than I thought it should be.

Then there was that damn rain.

I came home to finish the aforementioned freezer meals. I’ve been working on this project since Sunday. I’ve made 4 trips to various food purchasing establishments* and spent a total of 15 hours standing in my kitchen to make 39 dinners.

I tried to turn on iTunes through my Apple TV, but it isn’t working. Neither is the D drive attached to my computer and my PC is seriously acting up. That’s awesome because all of my Free Range Media stuff is on that hard drive.

I finished the freezer meals. We may not have any money but we have an ass ton of food in this house. Next week I’m working on freezer breakfasts. Hey, my child has been known to eat Top Ramen and chips while I’m non-functioning. I figure I can get the husband to feed him waffles and a decent dinner. Lunch may be questionable.

The rain stopped so I decided to clean the chicken coop. You decide if that’s a good or bad thing.

I’m going to spend the evening watching stupid television programming and lamenting the fact that I didn’t pick up another bottle of wine while I was at the grocery and still oblivious to how much money was in my checking account. 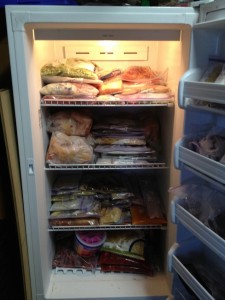 But I made 39 dinners. Boo Yah suckas! Look at that shit. Am I ready for end times or what. Hey, I could totally be on that new show Doomsday Preppers. You should totally see my cabinet of pickled stuff.