I hate those posts where people apologize for not posting.? Then every single post they make is an apology for not posting because they only post once every 6 months.? Why have a blog then?? Personally, I’m busy.? I post when I can or when something really ruffles my feathers.? In the mean time I spend my few precious minutes squeezing in another project here and there.? This week it was mostly work.? Real paying work.

Monday we decided to have a little family trip to the Western Washington State Fair, also known as the Puyallup Fair (if anyone from outside of WA can pronounce that correctly I’ll give you a sticker).? In previous child-free years we have “done the Puyallup” every other year.? One can only take so many fried foods and 4-H shows.? We didn’t go the first year the boy was home because the last day was the first weekend we were home.

We went last year with the trusty in-laws and had a pretty good time.? The boy didn’t think too much of it because he was a little overwhelmed with all the people.? He did play for what seemed like an eternity on the John Deere tractors, but I was busy learning about the coolest greenhouses in the world so I didn’t mind.

This year it was just the 3 of us.? I promised the boy that he could once again play on the tractors so after snack that’s where we headed first. However snack time proved to be a bit more difficult than originally anticipated.? I opted for a Krusty Pup (world’s best corn dogs) and the trusty husband a scone.? The boy wanted popcorn.? Easy enough right?? It’s the fair.? There has to be a popcorn vendor every 5 feet or at least a Kettle Corn both.

We made it to the tractors without spying a single popcorn machine.? Once he’d had his fill of tractors (ok, we bribed him off with finding popcorn) we moved in the direction of animals.? Get to the animals, still no popcorn.? From animals we go to the dairy barn.? Between the petting area and the dairy barn there was still not popcorn.? So we fed him chocolate milk while the trusty husband ate ice cream.? Then it was off to the Hobby Hall and on to the Grange Displays (my favorite part of the fair, seriously).? Still no popcorn.? Through half of the Sham-Wow and Ginsu Knife sellers and out the side door in search of that ever elusive popcorn.? It was finally determined that there was no popcorn to be found.? He settled on french fries instead while we shared a Yaki Soba.

We strolled through the other half of the stupid shit we don’t need hall and on the very last aisle we found it.? Gourmet popcorn.? Granted, we were looking for good ol’ fashioned trans-fat laced popcorn, but this would do.? The popcorn ladies had all kinds of fancy popcorn.? We asked the boy which one he liked and he declared he wanted strawberry.? Being the anti-popcorn person in the family I was a little disgusted by the though of strawberry flavored popcorn, but I tried it to be fair.? Dammit if that stuff isn’t addictive.

I would have a nice conclusion at this point, but I’m bored of writing so you get photos instead.? Look! 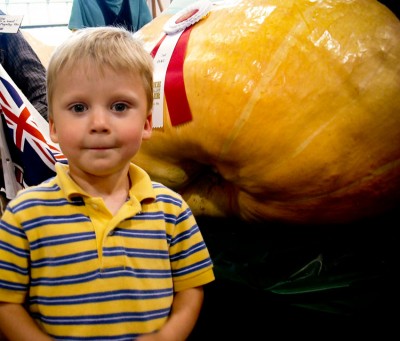 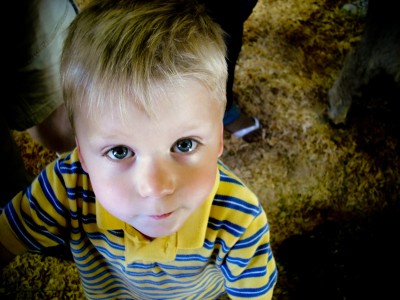