There is a list of holidays that I believe are a big waste of time.? New Year’s for one.? The point is to stay up late and get drunk.? Hell, I could do that on a Tuesday.? Valentine’s is another.? I guess this is partially because of my history with one of the companies that helped perpetuate Valentine’s.? When the holiday came the day after Christmas it lost all of it’s flair.

Needless to say we don’t do much for Valentine’s.? I would much rather spend it with my boys sitting around at home.

This year we had the opportunity to do something very fun.? One of the coaches for the boy’s hockey team arranged for the Mini Mite program to skate during the 1st intermission at a Seattle Thunderbirds game.? It just so happened that the game we were given was on Saturday.? Valentine’s Day.? So I spent my entire weekend engrossed in hockey fun.? I couldn’t think of anything better.

Saturday morning we had practice.? Hour and a half of hockey fun.? That evening we had to be at ShoWare center by 5:45.? Game started at 7:05.? We arrived promptly along with the other 106 people in our group.? The trusty husband had the pleasure of escorting the child to the locker room to dress and get ready for the “big event.”? We had spent the past 2 weeks prepping the child for this.? He has become quite the good little skater, but does not like to skate with his stick.? We talked with the coaches about him wanting to do it, but being afraid of him wandering aimlessly by himself.? He’s not quite a team player.? They assured us that they wouldn’t let that happen.? We also told the boy that daddy couldn’t go out onto the ice to help him.? Oddly, he seemed ok with this.

During the whole first period the child kept asking if it was his turn yet.? “Not quite yet,” we’d tell him.? He was so excited when the coaches told them it was time to go.? I was so nervous for the boy that my stomach was in knots.? I’m rather glad that his father was the one to get him dressed.

In the end he did a great job.? I have a few photos of the event and a video of his time on the ice, but for some reason WordPress doesn’t like them.? So you get this one (sort of blurry) photo.? This is after they are done skating walking back to the locker room.? Derek took it as he had that vantage point. 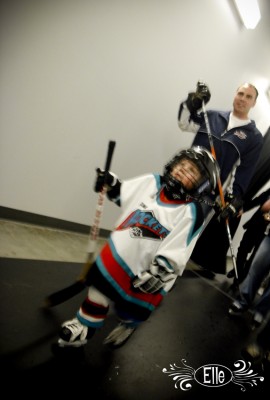 Believe it or not… he is all smiles.