After three weeks in our house we’ve had the opportunity to get to know the itty bitties a little bit better.  They’ve also become quite accustom to us and are even tolerating that dog.

While Hammond might be the most likely to sit still for a photo, Fiona is much less likely, but not like her brute of a brother Truman. 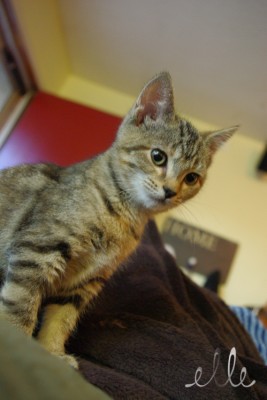 Miss Fi has taken up the occupation of resident lap kitteh.  While it is not yet to the extent of Isis was (if I sit there she shall sit too) it is pretty consistent.  She also must sit if one of her brothers shall occupy the space.  Thus causing me to usually have at least two kitties on my lap.

Fiona must also make her presence known by rubbing her body all over my face.  This is wonderful since I’m allergic to cats.  I have upped my dose of allergy medication to a Zyrtec in the morning and a Benadryl at bed time.  I sleep reeeealy well.  This is mostly because she prefers to wake me up by licking the end of my nose.  You know that people who are allergic to cats are allergic to their saliva and not the fur right?  Cat’s groom themselves… with saliva.

No matter what she is the little peanut of the group.  At their doctor’s appointment last Thursday she weighed in at a whopping 2.7 pounds.  She’s a wee one that Fi. 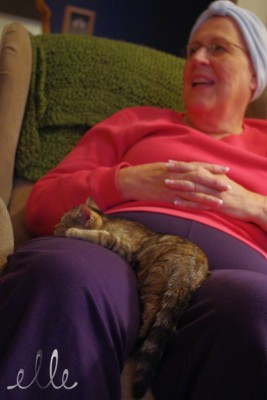 The week we got them we broke all new kitten protocol and took them to my in-laws house to meet the family.  My mother-in-law had come home from the hospital and my niece and sister-in-law were headed back to California and wanted to meet the itty bitties before they left.  They wouldn’t be itty bitty when they returned at Christmas.  After some serious exploring Miss Fi took up residence as therapy cat on my MIL’s lap.  She slept there for close to an hour. 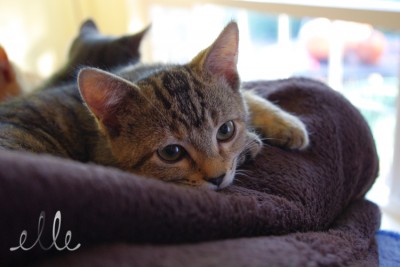 So what is Fi really like?  She’s feisty that one.  She’s also quick.  That girl can move.  She has madd feather wand skillz.  She doesn’t take any guff from her brothers.  She can dish it as much as they can.  She is sweet and follows me like a little shadow.  She loves bedtime and would happily fall asleep on my chest.  When not found on my lap she can usually be located on my woobie or under one of her brothers.

I think I’ll keep her. 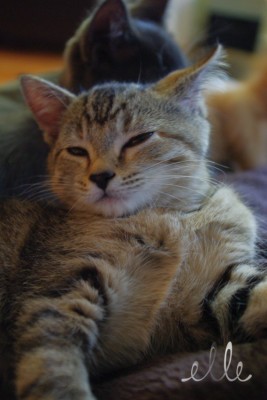