I had a meeting at church yesterday afternoon so the trusty husband and the boy went home while I caught a ride with a friend. ?I walked in the door and the trusty husband said, “so I had an interesting phone call.” ?My response was, “should I get a drink first?” ?To that he said, “um, maybe… no… maybe.”

While I was at my meeting the trusty MIL called to ask if we were serious about actually getting a dog. ?We’ve been talking about getting a dog for well over a year now. ?We’ve searched almost daily on the Humane Society website for a dog that would be a good fit for our family. ?We found a Jack Russel mix that we thought was going to be a good one, but it was claimed by two people and there was a court case pending about it. ?We didn’t want to be involved in that. ?Then we did some researching and thought we had decided on rescuing a pit bull. ?We were working with a local pit bull rescue and were matched with a 7 year old female who was just a love. ?We did some thinking about it and realized that we were 3 months away from our last post placement report and didn’t know how biased our dumbass social worker was about dog breeds. ?While the Russians could not repossess our child, they could make it difficult for future families. ?Pit bulls have a bad enough rap, I didn’t want a family missing out on having a child just because our social worker was stupid. ?We also got to thinking about the dog’s age and how the boy would react to potentially only having this dog in his life for a short period of time. ?Back to the drawing board. ?A few months ago we found a boxer mix puppy on the Humane Society site that I thought would be perfect. ?The trusty husband had his heart set on a Boxer (me on a Pit Bull). ?I went to check out the puppy and some slack jawed yokels took her right out from under our noses.

We put dog finding on the back burner.

One of the trusty sister-in-laws works with a lady who breeds show boxers. ?Sis talked to the lady and they had a litter of puppies being born at the end of November. ?This particular breeder has some sort of agreement system if you adopt a show dog. ?I was going to contact her last week, but got distracted by something shiny and forgot. ?We also didn’t want to spend $800 on a championship line show dog.

Last week the trusty MIL mentioned that she saw boxer puppies in their paper. ?Really, was our response. ?Thus prompting the call on Sunday.

The trusty in-laws drove to the owners house because she had 2 little girls left. ?If we were serious they would get one for us. ?As we were approaching the Christmas Tree Farm (did I mention yesterday was Christmas tree day?) the phone rang. ?”When you are done getting your tree you need to come pick up your new child,” the trusty FIL said. ?Um, ok. 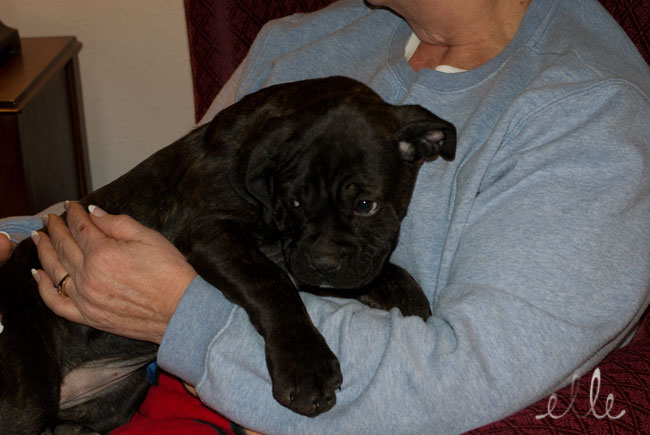 She is a brindle Boxer Mastiff mix. ?She is 8 weeks old and has no name yet. ?When I’m not totally sleep deprived (not because of the dog, but rather the wind) I will tell you a little more about her and our first day together.

In the mean time… anyone have any suggestions on a name? ?We are having a rough go of it. ?The boy suggested Gemma (with a hard G) and the trusty husband said Bella. ?I don’t like either of those. 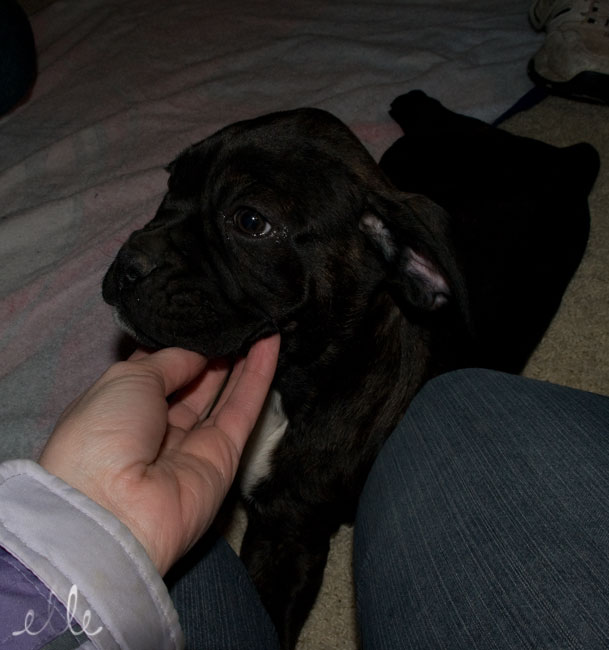 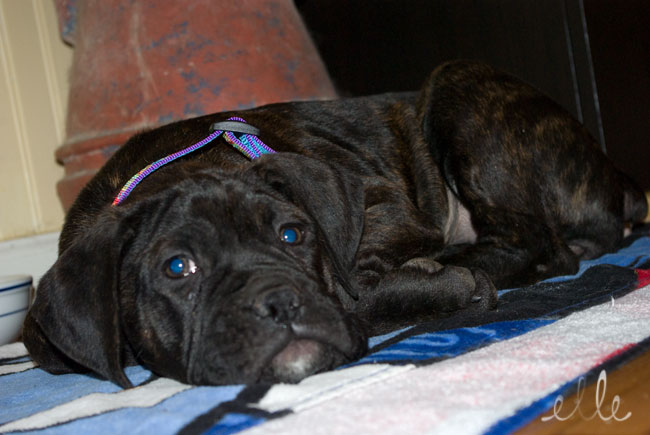