When your husband says, “If {*insert child’s name here*} likes piano lessons we should look at getting a piano.” most normal people would say “yes dear.” Especially if you live in a 1400 square foot house that includes 3 humans, 3 cats and a very busy dog. So when a friend mentions that her parents are trying to unload giving away a free piano and you find yourself calling DIBS! It may or may not end up well.

I found myself in this situation on Friday.

My friend Teresa said her parents had a free piano they were giving away all you had to do was haul it away. My first questions were what kind is it and what’s wrong with it. Because honestly… who gives away a perfectly decent piano? Her response was it’s an upright and it probably needs to be tuned. I can manage tuning. It isn’t horribly expensive to have a piano tuned. Having a sound board replaced or repaired (as is the case with my Father-in-law’s piano) is very expensive.

Someone else beat me to the punch and said she’d take it. I expressed my displeasure. I should also mention that my husband was in Montana as I was attempting to commit us to a free piano (that he would have to move). Teresa asked if I still wanted it if the other person didn’t. Um hell yes!

Husband comes home, I inform him that we’re getting a free piano, he recruits a bunch of friends, borrows the shop truck and arranges to get the piano Sunday morning. Our conversations revolve around not being sure if a) it will fit through the door between the living room and the family room (thus requiring them to carry the piano through the backyard or empty the entire garage to go that way) and b) the size of it. My wonderful husband says, “the only problem I can see is if it’s an upright grand.” We had circa 1970 console piano in mind.

Derek heads off to meet his friends at the piano owner’s house, walks in the door and takes one look at the new to us instrument.

Not only is it an upright grand, it’s circa 1890. It’s also a Julius Bauer. The J. Bauer Piano Company constructed the soundboard out of solid wood. So is the cabinet. The thing weighs close to 900 pounds. 7 guys at the original owner’s house and 6 guys at our house, a truck without a lift gate and a door that is 1/4″ larger than the widest part of the piano… 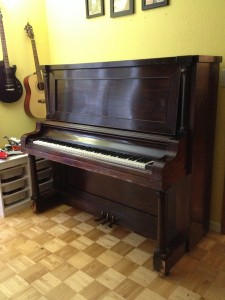 Despite being 130 years old this piano is in extremely good condition. It’s mostly in tune. It will need a minor tuning after it sits for a while. We’ll have it appraised. It was last appraised in 1992 and it was valued at $900. The amazing part is that this instrument was destined for a landfill. Tim, the owner, told Derek that if we didn’t take it he was just going to get rid of it. Derek and I firmly believe that an instrument of this significance should never be thrown away. Even if we never play it we saved it from an ugly death.

I’m thrilled with my new acquisition. The boy is going to start piano lessons after the first of the year. Hell, I might even try to learn to play again.