Yesterday afternoon at about 2:00 Bev Lindholm passed away.  I don’t want to say that she lost her battle with brain cancer because she gave it one helluva fight.  In the end she knew that all of us were taken care of and that she didn’t need to worry.  She died peacefully with her husband and daughter at her side.  We had hoped that she would survive until Wayne (my BIL) and Diana (her sister) arrived, but we spoke to both of them and they were at peace that they weren’t there.  Dad told Mom not to worry about us and that it was OK to go.  With that she took two long last breaths and made her way home.  She joins of myriad of family who welcome her with open arms. 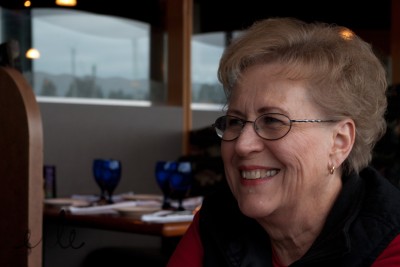 Bev was a woman who was larger than life.  In the car on the way to Olympia yesterday I asked my friend, Kerstin, “how does Bev Lindholm die?”  She was one of those people that you thought would live forever.  She was the person you called when you needed help with something.  She was the person you called when the world had beaten you down and you needed to be lifted back up.  She was the person that told you you can do anything you want.  She was your strongest cheerleader.  She was a wife, mother, daughter, aunt, sister, grandmother and friend.  She was a mentor, music director, teacher, spiritual advisor, comedian and pro extension chord destroyer.  Most importantly she taught me how precious life truly is and to not take it for granted.  She left behind her partner of 53 years, 3 strong children who grew up to be amazing adults, 2 children-in-law that she was so kind to allow to marry her children and 2 beautiful grandchildren who will always know how amazing their Grammy was.