Last year Christmas was sort of awful.  Not so much the actual Christmas Day thing, but the weeks leading up to it.  Things rapidly started going downhill on November 8th… if you know what I mean.  From there, we had a major bird massacre that involved a spontaneous chicken death on Thanksgiving Day and then a duck/chicken vs. raccoon attack 2 weeks later.  Needless to say the raccoon won that one.  I ended up having to “euthanize” one chicken at 3 a.m.  The week before the bird attack we received news that Derek’s uncle suddenly passed away.  The day the 2nd & 3rd ducks were killed we found out that a very close family friend also suddenly passed away.  Within the span of 3 minutes I discovered 2 dead duck bodies, found out a family friend died and my sister vaguebooked on Facebook that my dad was taken to the ER that night.  I call my sister out only because it is part of the story.  Good news was my dad only had kidney stones and he’s fine.

All of this happened about 3 weeks before Christmas.

The three of us walked around in a funk for quite a while.  We wanted to run away.

While permanent expatriation is not an option for us (especially not now), temporarily running away was a viable solution.  We did some searching and maths and discovered that it would be the same cost to go to Bali, Indonesia as it would be to spend a week in Disneyland.

It was a big duh.

Derek booked the tickets and we waited.

We were scheduled to fly out at midnight on February 19.  I found out I had cancer on February 15.  That’s 3 days people.

Derek tried to tell me that we’d have to wait to see if we would still be able to go on the trip.  I told him, “screw you.  I’m going to Bali.  Cancer can suck it.”  So I got on the plane and I took the guys with me.

Before leaving we convinced the boy that cancer doesn’t exist in Bali.  We had him snowed.  Really, we just agreed that we would run away and ignore the fact that mom had cancer.  So we did.

We traveled during mid-Winter break.  We only had 1 week to get there, see stuff, get home, get over jet lag and go back to work.  We flew Xiamen Airlines, Vancouver BC to Xiamen, China.  We had a 12 hour layover where we were able to visit Gulangyu Island and then were off to Bali.  We arrived at 11:20 p.m. on Monday and were scheduled to leave at midnight on Saturday.  That gave us basically 4 full days in Bali.

We tried to sleep in.  We started the morning with tea and breakfast on our own private patio over looking the pool.  It was hot, humid and amazeballs. 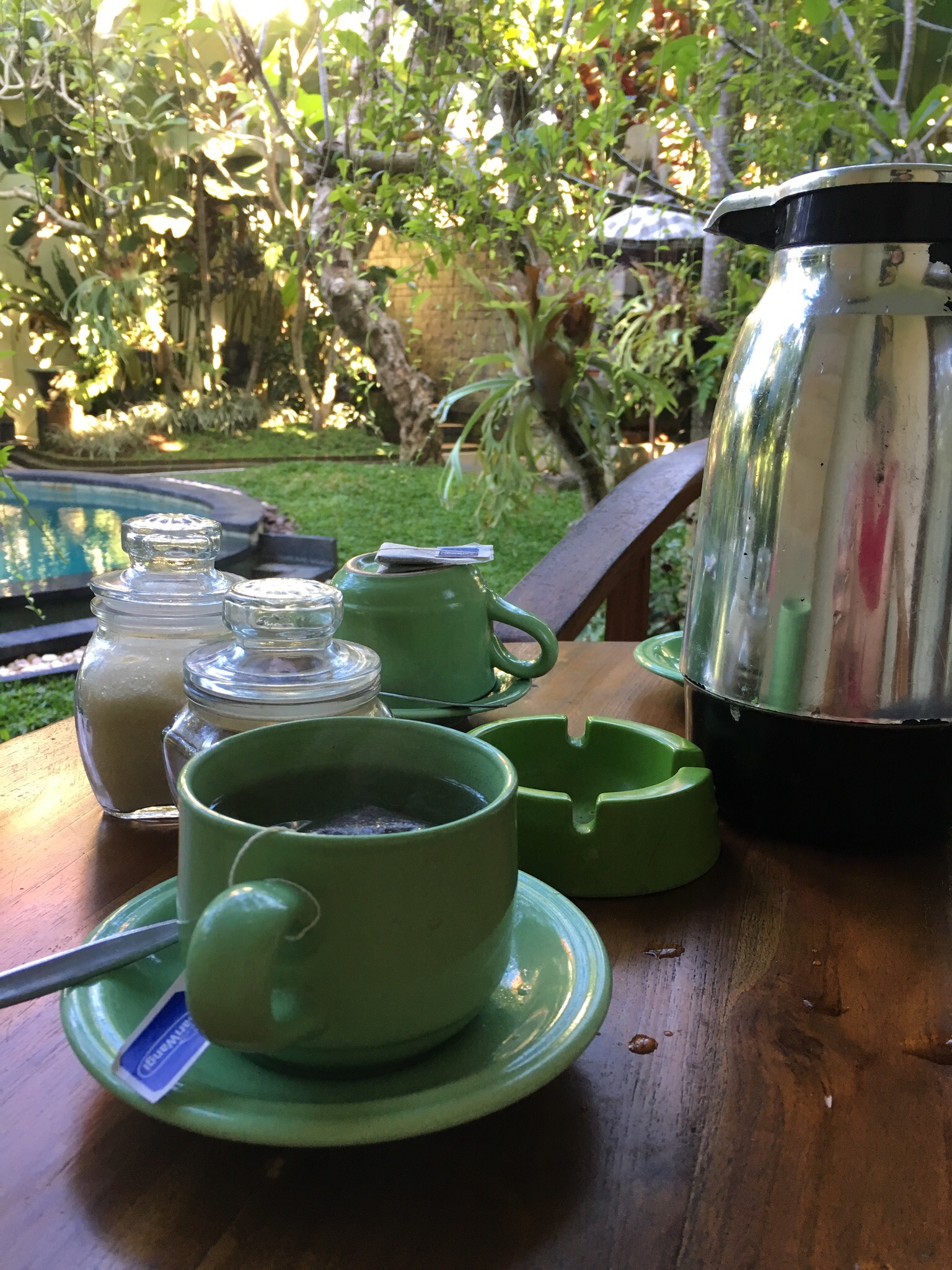 From there we ventured off into town to do some sightseeing.  The town of Ubud is beautiful!  It is up in the hills and the greenery is spectacular.  The shades of green are more pronounced in El Salvador, but this was just as beautiful.  We made it down the street to the Sacred Monkey Forest, home to over 600 Balinese Long-tailed monkeys. 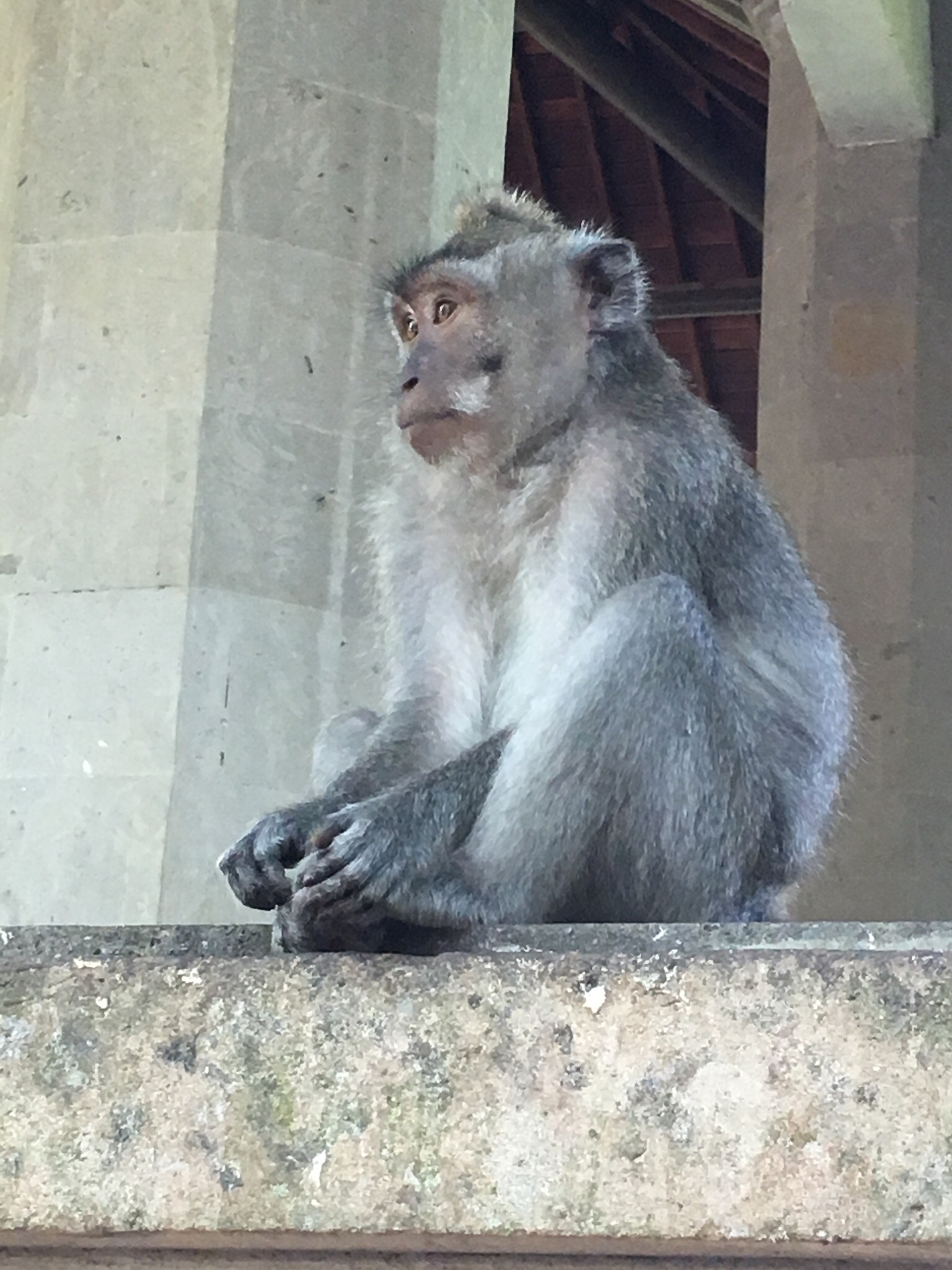 We fed the monkeys, walked through the forest and one cheeky little bugger tried to steal my water bottle.  It was totally worth it. 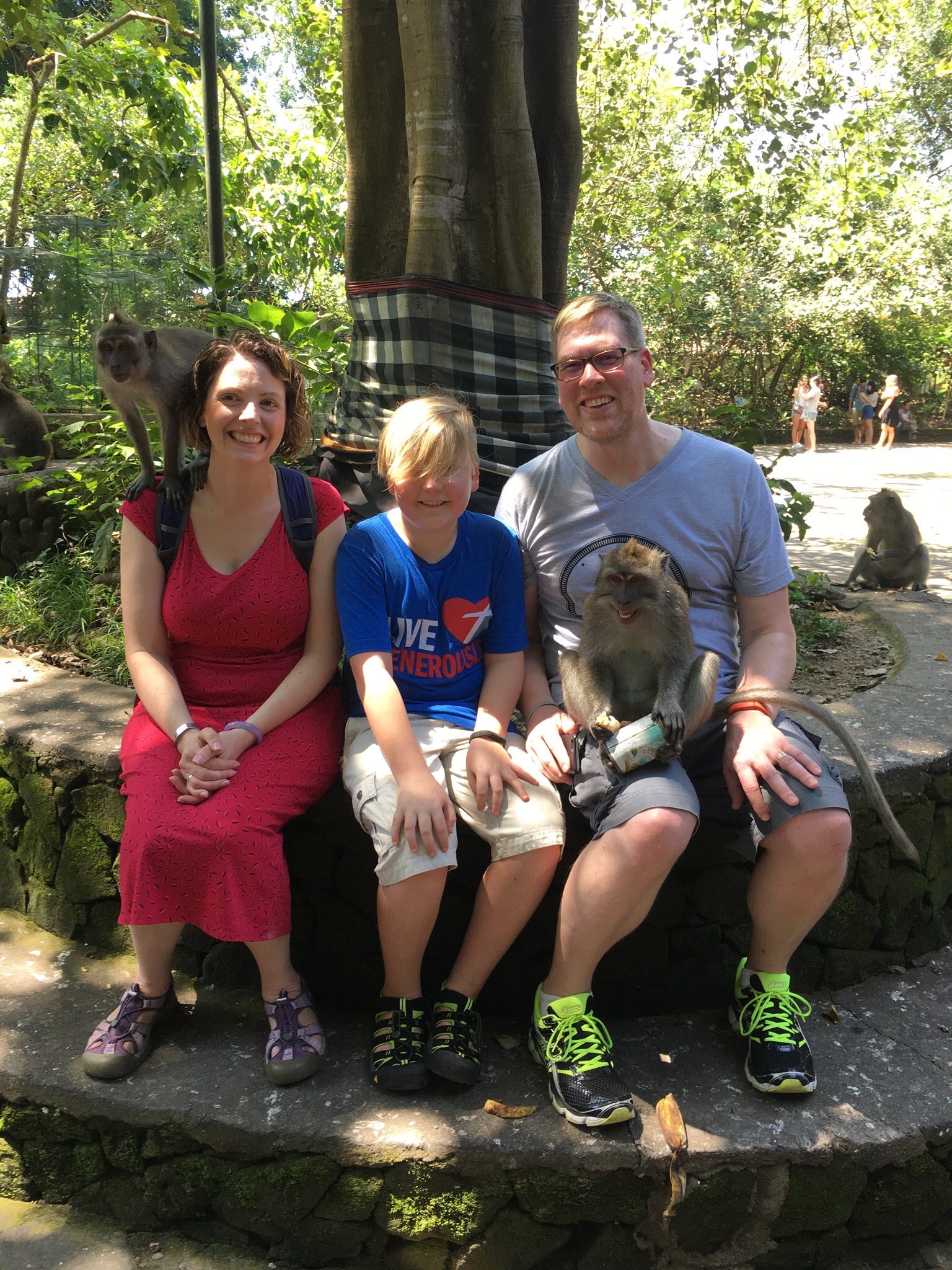 The rest of the day was spent shopping, wandering around the city and swimming at the pool.  The whole point of the trip was relaxation.

We planned to spend a day and a half in Ubud and then transfer to Sanur for the beach.  In hindsight we should have stayed in Ubud the whole time, but who knew.  We hired a driver to pick us up at 3:00 to take us to Sanur so we had time in the morning to explore.  I’d found a tip about a great little walk to a village that had a cafe. I had written down the directions and I’m so glad I did.  We might have been able to follow some signs, but highly unlikely.  The walk was out to the Campuhan Ridge and it was incredible. 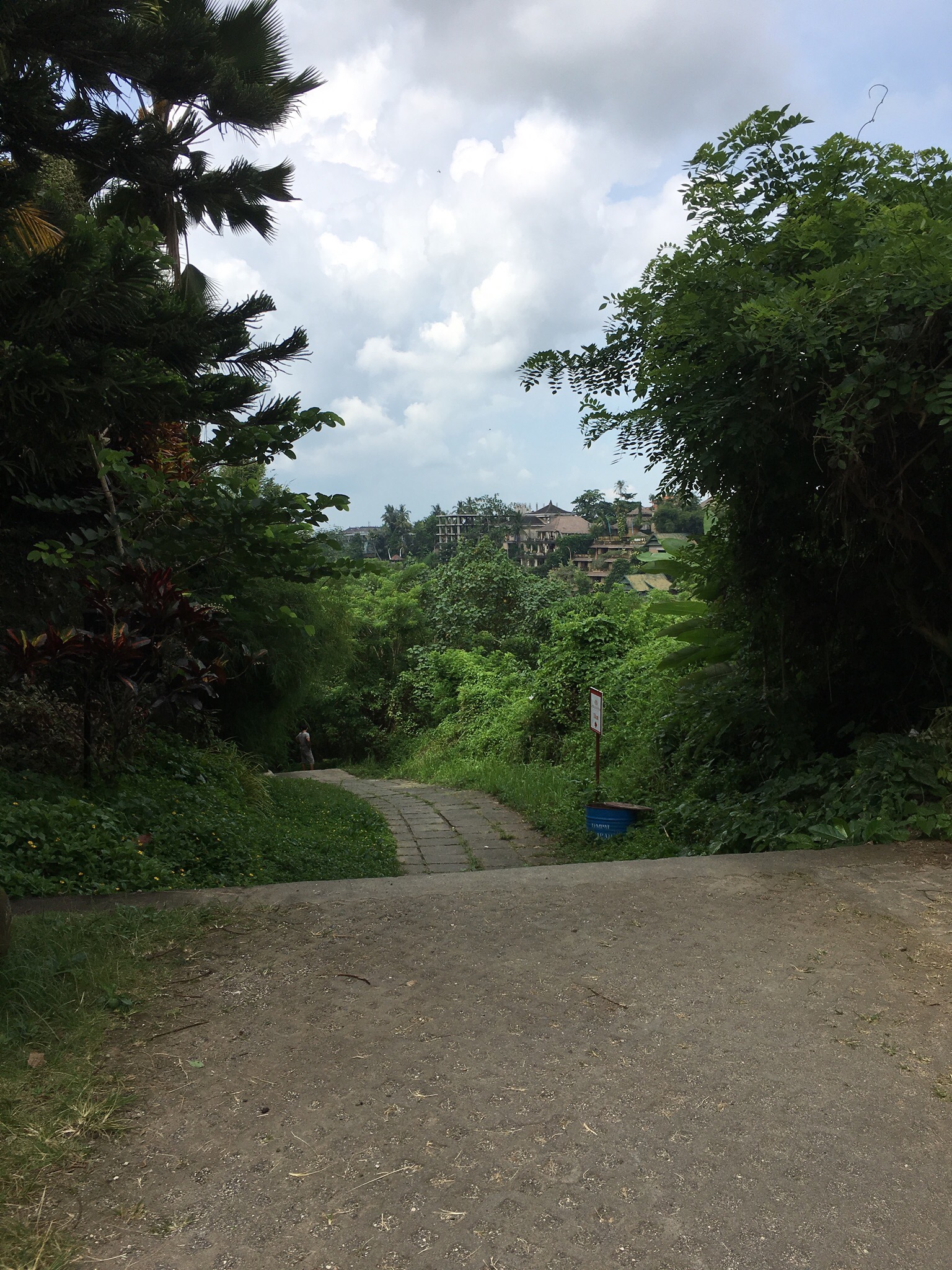 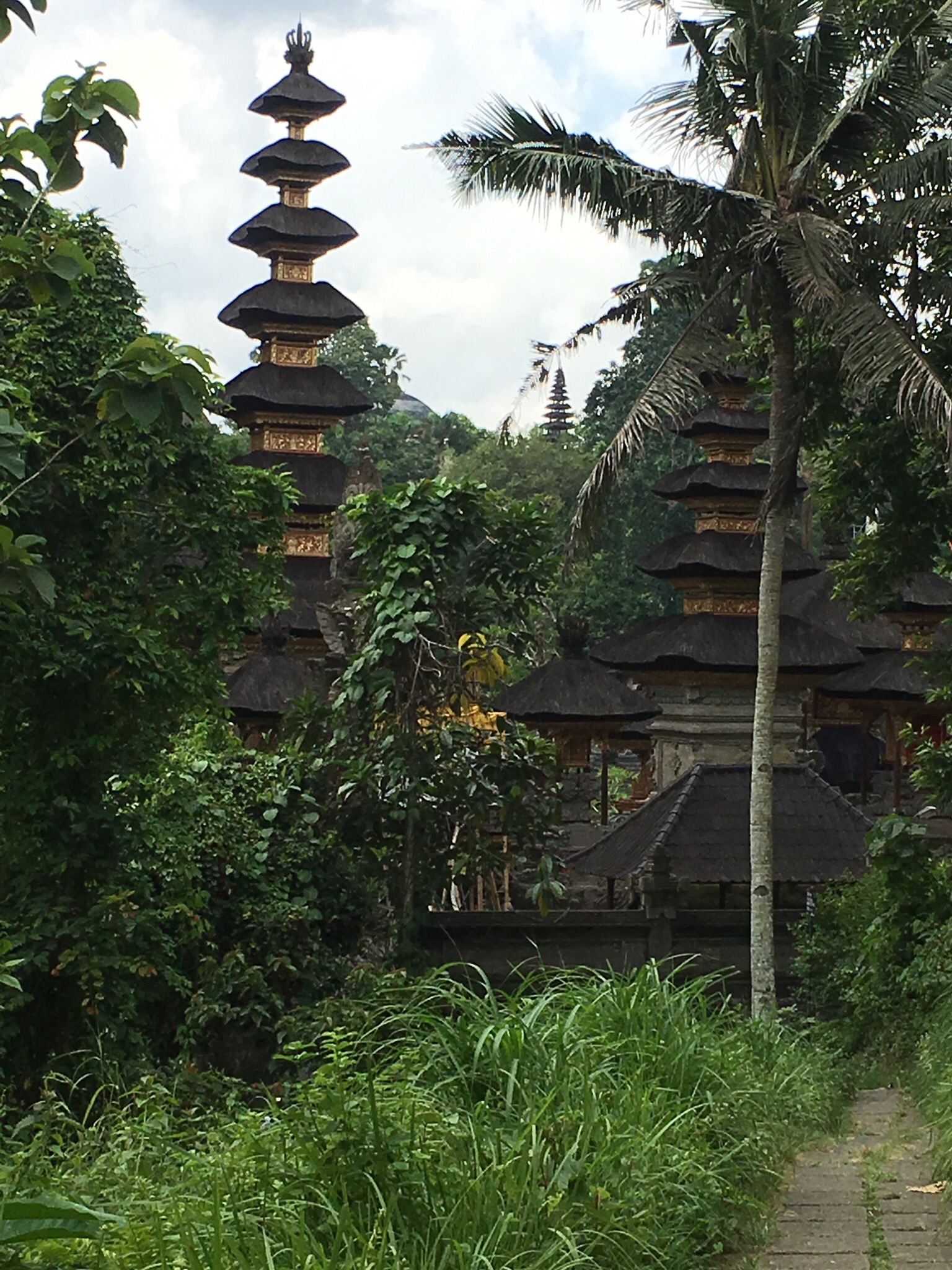 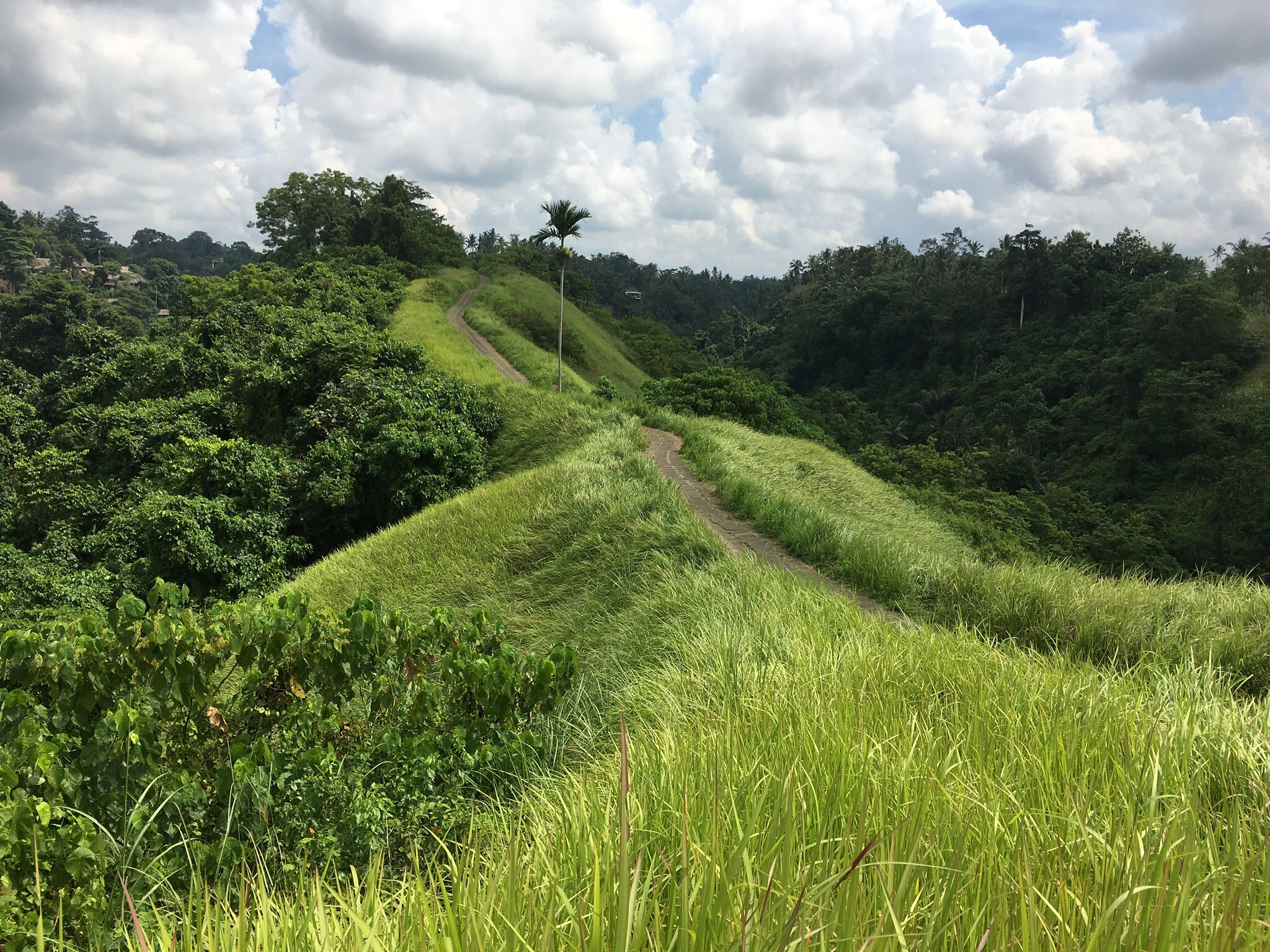 Along the way we passed a temple, walked along a narrow path on the top of the ridge and ended at a little artist’s village. Near the end of the village is a place called the Karsa Kafe where we had a lunch.  Given the choice I’d never leave the little cabana we spent the morning in. 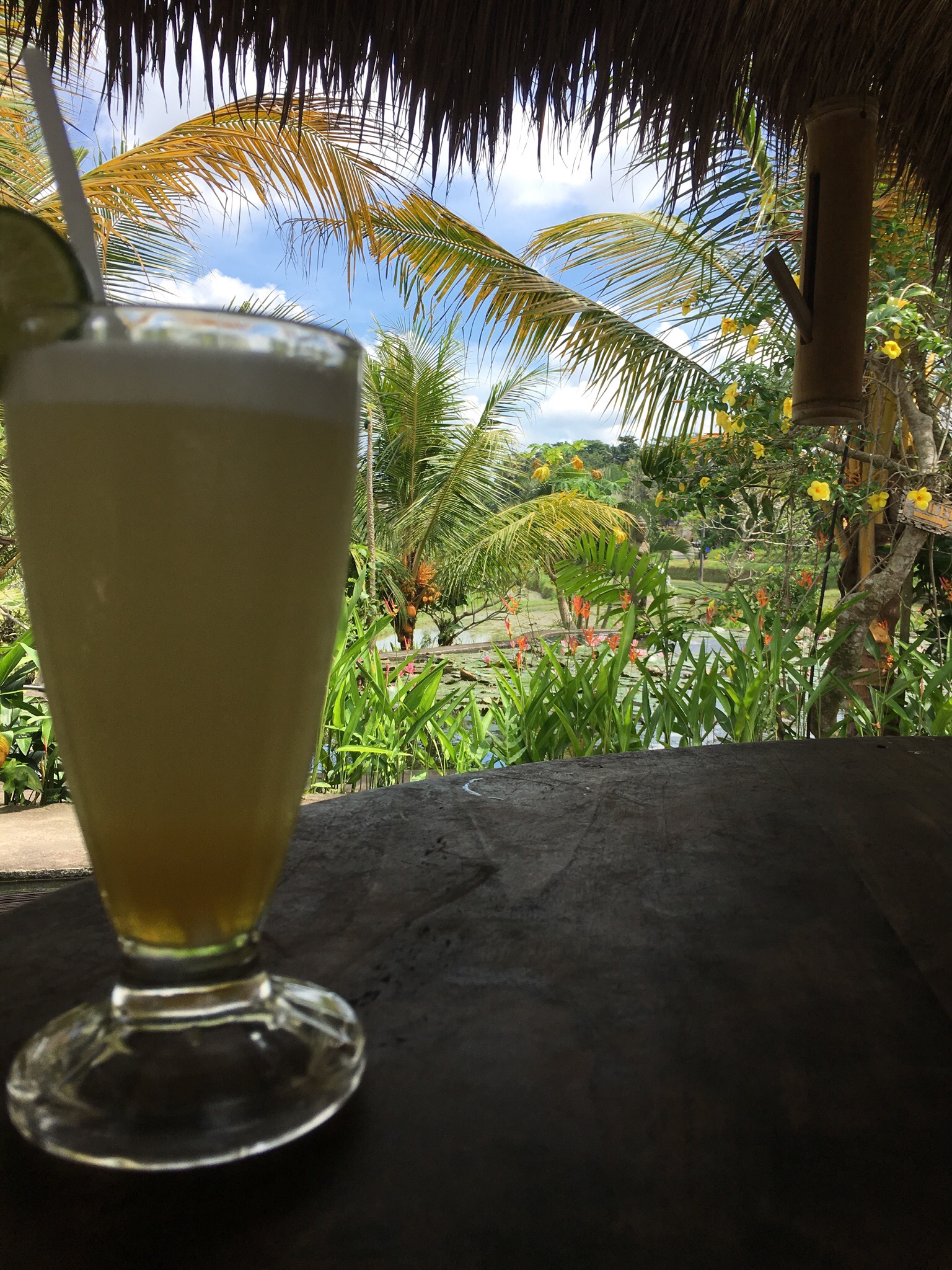 We met our driver at 3 and he took us to a agrotourism place that did coffee tours/tasting.  We were able to try the famous Luwak Coffee.  I’ll just let you google that one.

We ended the day with Indian food (of doom) and passed out by 8:30 which is exactly why we elected to see the “geriatric crowd beach” as opposed to the drunk Australian beach.  12 year old in tow and all.

This is where the trip took a nose dive.  We believe the aforementioned Indian food of doom may have been contaminated.  The boy thought it was too spicy so he didn’t eat it.  I don’t eat chicken after the “euthanized” chicken at 3 a.m.  The boy had ordered butter chicken and the husband ate it.    He then proceeded to spend all of Thursday in the hotel and most of Friday.

Not to let a sick person ruin our vacation, we left Derek’s ass in the hotel room and we went to the pool.  We also walked along the beachfront and made many trips to the VERY air conditioned grocery store. 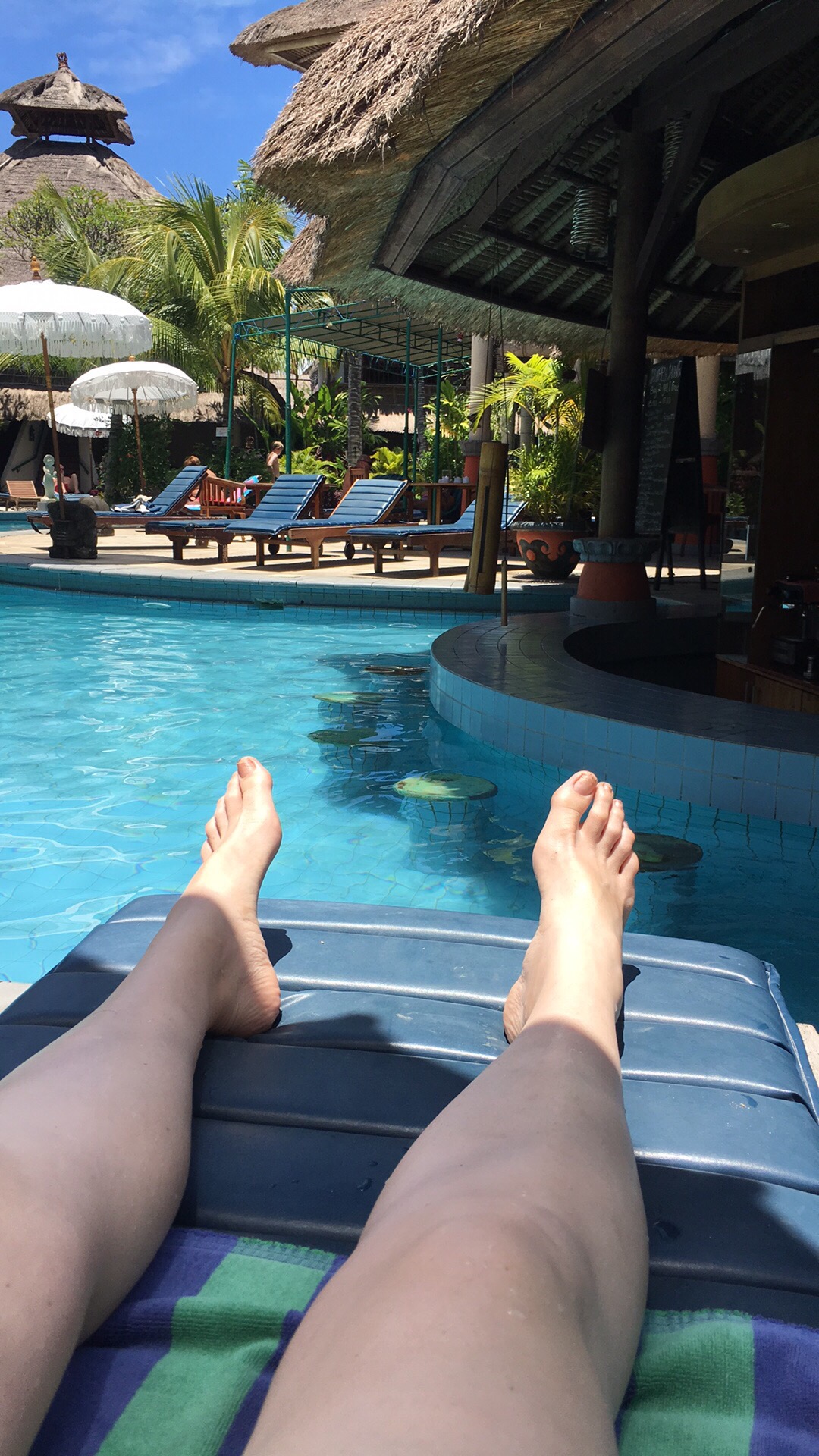 Sadly, I did not take advantage of that swim up bar.  A choice I now regret.

Many trips to the pharmacy and grocery store later, the boy and I once again left the husband’s butt in bed and went to the beach.  We had breakfast beachside and then took a dip in the water. 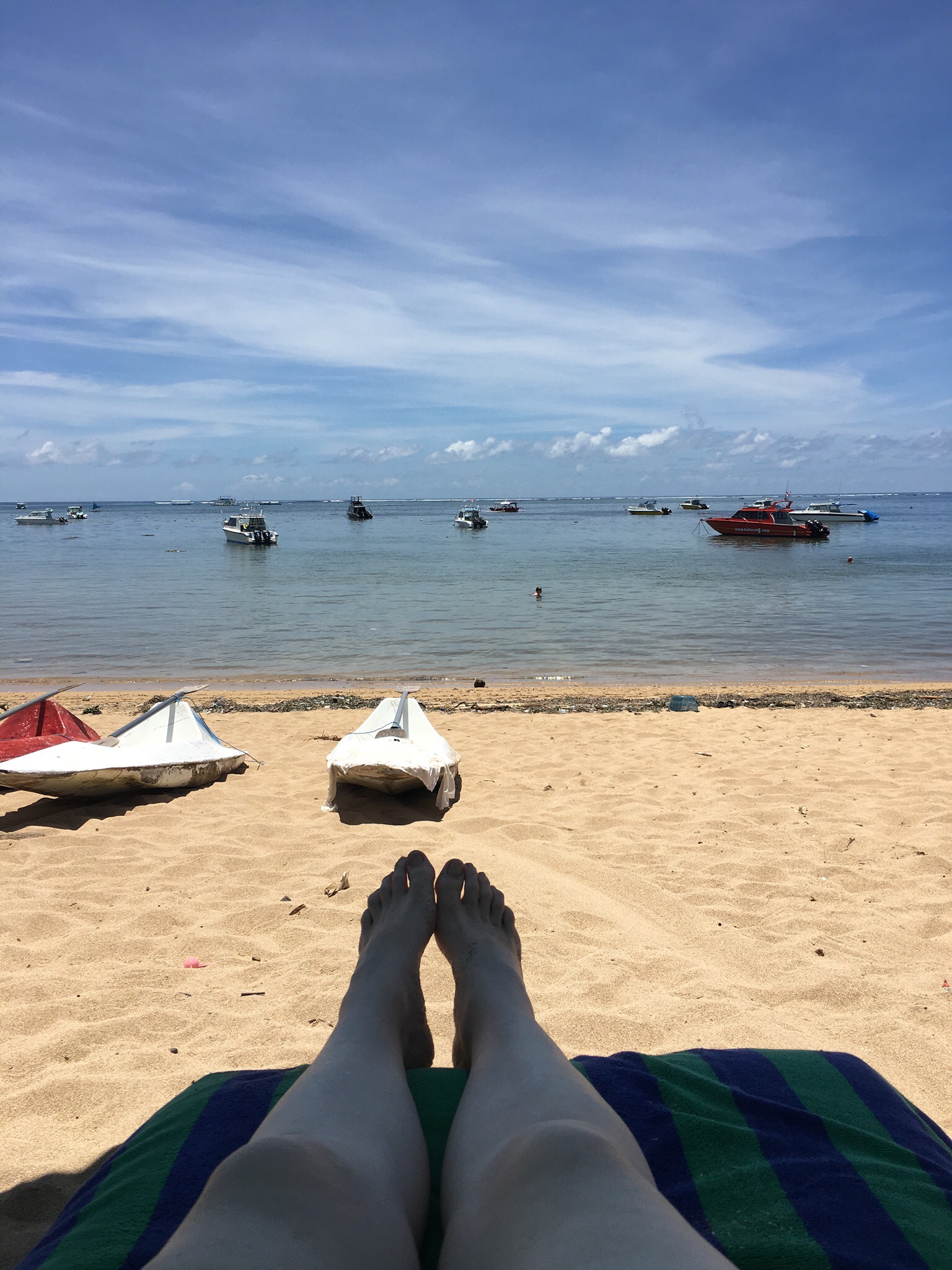 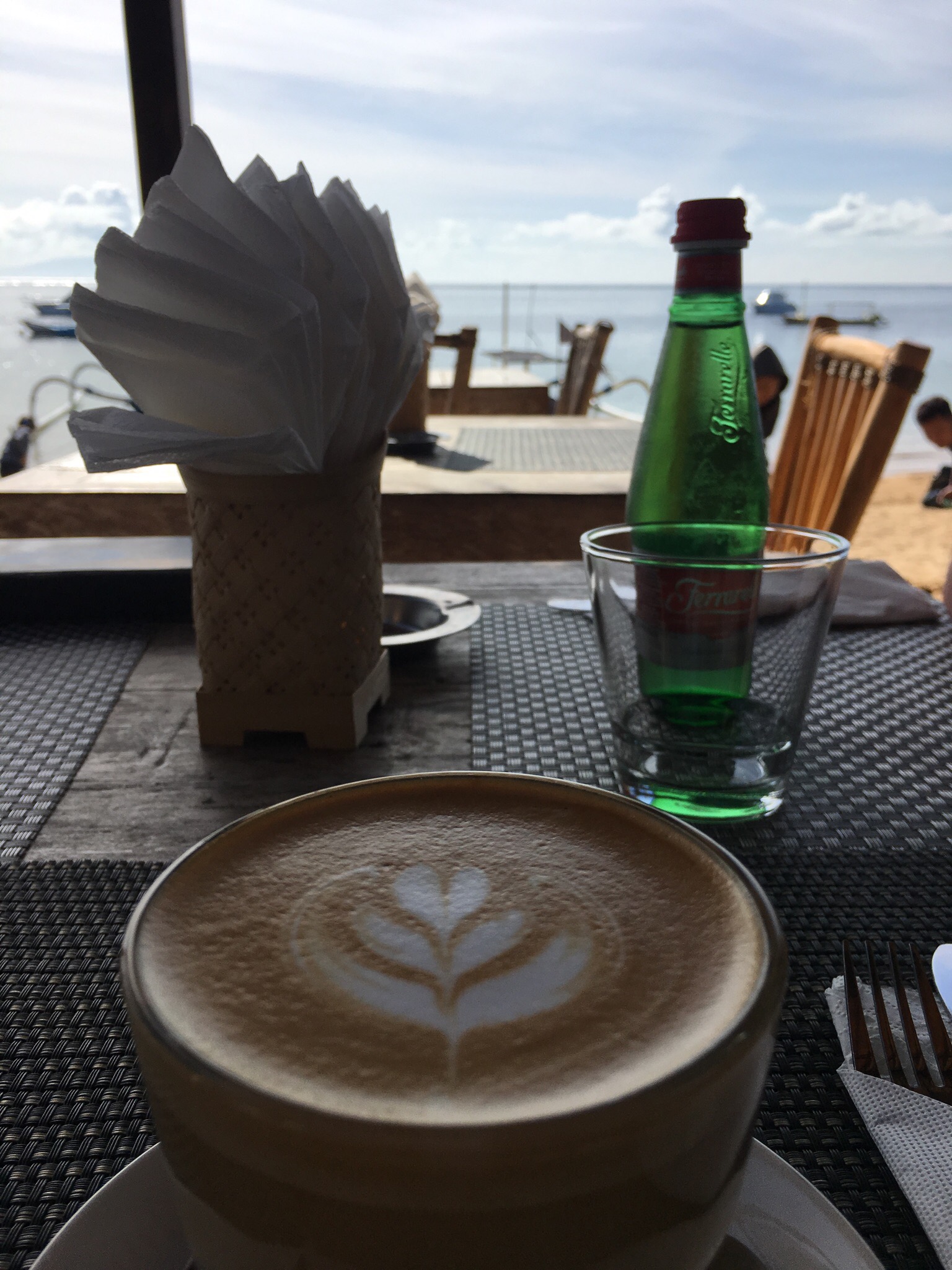 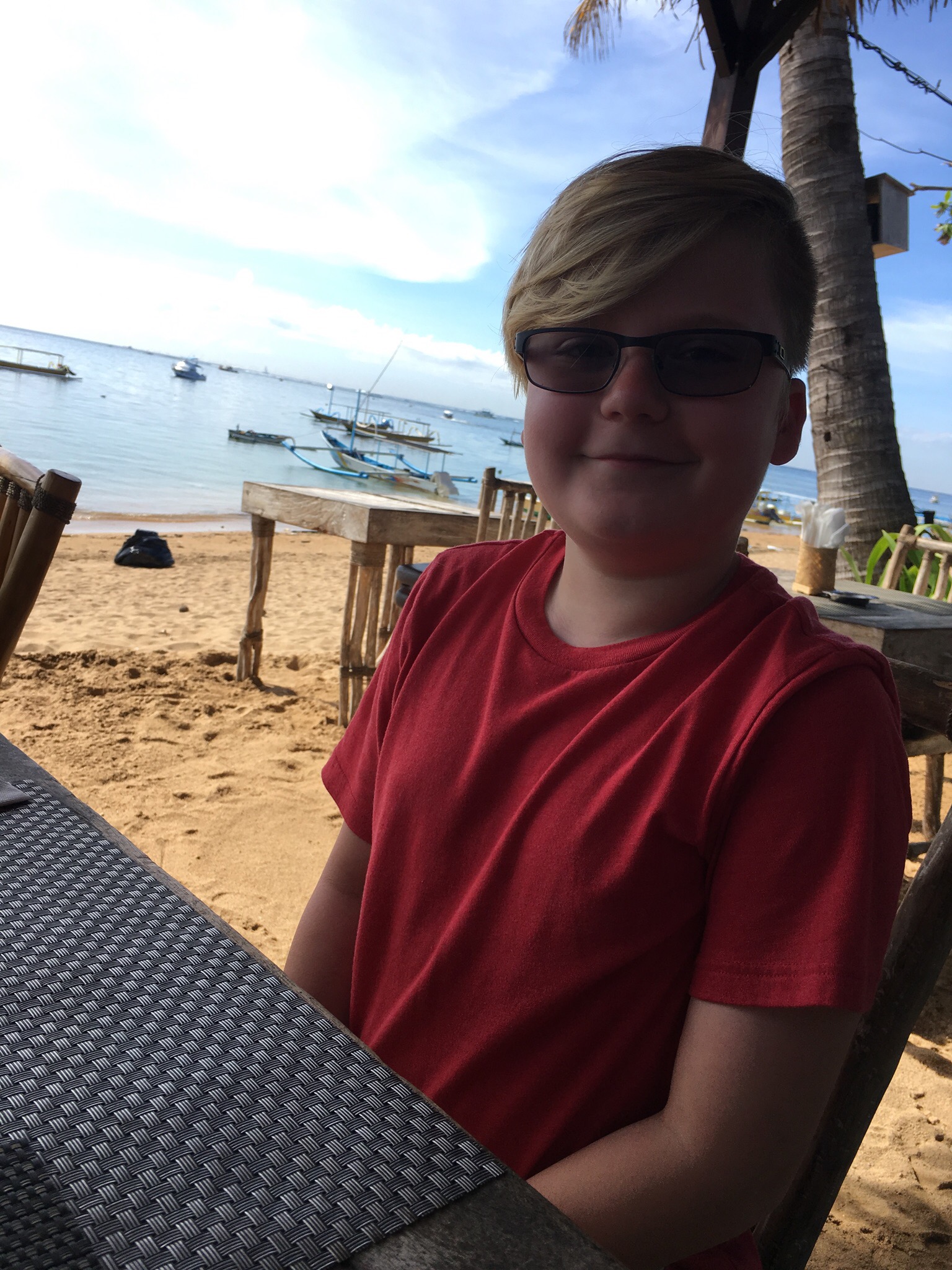 The hotel graciously let us check out at 9 p.m. So the husband could sleep more.  We eventually got him up and out a little bit.  He did go out to lunch and dinner with us.

As I mentioned, the flight left Bali at midnight.  We had another layover in Xiamen, China.  This one was 16 hours.  I was not about to spend that time in the airport and Derek was not about to spend it trekking all over the city.  He rented a room in a travel hotel and it was the best $50 we ever spent.  We napped then went out to do some shopping and find lunch.  We then napped again and showered and it was time to come home.

That is the very quick version of our trip.

Would I go back?  Oh goodness yes.  I would stay for a month if I could and stay the whole time in Ubud.  I loved it there.

Coming home was a bit of a shock in that I had to step back into that cancer patient role.  However, even thinking about the trip makes me happy (even with the sick husband).  I was able to let go.  I could be a normal person for just a few days.  I will never have that chance again.