In 2004 I sat in front of a computer endlessly searching for information about international adoption. Little did I know what that path would lead to. As I gathered more and more information about the country we would eventually adopt from I also prepared myself for the worst that could possibly happen. In the end my husband and I spent two long years adopting a son from the Russian Far East. This is not a tale of that story, but rather one that followed, eight years later.

On a sunny June morning our car pulled up to a small yard surrounded by a large iron fence. As we drove through the gate fear and anxiety overtook my senses. It is only now that I can look back at photographs to take in the whole picture of the surroundings. Outside of the large carved wooden door laid a small play yard. This yard was the sole outdoor space for the one hundred fifty children that lived within Baby Home #1 in Khabarovsk, Russia. The yard contained a rudimentary swings, a rusty monkey bars and a lopsided slide. A small ‘playhouse’ was in need of a new roof and weeds grew up in the sandbox. There was no grass and the recent late Spring rains created large puddles that would later attract large mosquitoes in the humid Summer heat. The few play structures lacked everything that would be considered joyful to a child.

At the time I walked through the play yard it did not occur to me that this is where my child may spend a portion of his time. After all, the child I was going inside to meet was only nine months old. I had no concern for the small toddlers that called this place home.

Nine months after our foray into the play yard at Baby Home #1 we learned that the child we met there found another home with a Russian family. This news was devastating, but our adoption coordinator assured us she still would help us build our family. We were told that we would not be matched with another child from this same facility. The mental pictures of the play yard vanished as we looked to another Baby Home.

In early April, 2005, we awoke to a fresh blanket of snow. We were once again in what we were now considering a second home, Khabarovsk. This time we were to meet a new child. This time we were traveling to another Baby Home. The sun rose higher in the sky and the snow began to melt. The melting snow flooded the streets and cars looked like small watercraft. We watched from the grimy car windows as pedestrians on the sidewalks shielded themselves from sprays as cars sped by. We turned onto a small side street, drove through a lake of a puddle and then made the final turn onto a pot holed dirt lane. The towering Birch trees had no leaves and through the bare branches we could see the entrance to Baby Home #2.

Our driver stopped in front of the building. This time we did not walk through a play yard to reach the front door. Instead we walked under the sloped roof of the portico and stepped into the entry vestibule. The temperature was stiflingly hot and we quickly shed our coats and gloves. A caregiver ushered us into a tiny room and a short time later a tiny toddler was brought in to meet us. The tow headed child had a look of terror on his face as he was placed into my arms. Slowly he warmed to our presence. We broke the ice with small toys like a little truck and a container of bubbles. Later in our visit we were allowed to take small walks up and down the hall. It was during one such walk that a group of two year olds passed us. I stepped aside to let the little ones pass and as they did each one turned to me and made attempts to grab my pant legs. Each one cried out, “Mama! Mama!” hoping that I was the Mama they were waiting for.

The little faces were abandoned, with no one other than a woman in a white coat to love them. The children rocked themselves to sleep because there were simply not enough arms to hold all of them. No boo-boos were kissed. No bedtime stories were read. They lacked the one basic thing every child needs. A childhood.

Four months later we returned to Baby Home #2 to complete the adoption of our son. On a balmy August afternoon we returned to the shelter and were given the opportunity to play outside with our child. The caregivers ushered us into a small play yard with a small slide, a rusty monkey bars and a bench. Although he as nearly two, our son did not seem to know what to do with structures as simple as a slide. We once again played with bubbles and made attempts to teach him to throw a ball. We quickly realized that there were a number of little eyes paying close attention to our actions. 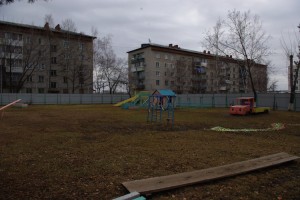 A group of three year olds were having their outdoor time. The second play yard held a much larger play structure, but it looked as if it could topple over at any moment. Boards were rotten and metal parts were full of rust. The children elected to hit each other with empty plastic bottles or peer through the fence rather than laugh a play chase. The caregiver made attempts to engage the children, but with such a lack of equipment it was difficult. Soon swarms of mosquitoes drove us back inside and I once again quickly forgot about the tiny play yard.

In the six years since my last visit to Khabarovsk my husband and I started a charitable organization. The Sweet Hope Foundation was born out of a need to help families with the large expense of adoption. We quickly realized that it was not only adopting families that needed help, it was the children that needed assistance too. We raised money and sent it to Baby Homes to do things as simple as put on a Christmas party for the children. One year the caregivers held a giant birthday party for everyone. The children’s basic needs of food, housing, and clothing are met, but there are few resources for anything else. Children are placed in these facilities due to abandonment, neglect, abuse or a whole host of other reasons. The children face the most difficult times in their lives and have little to call their own. Their lives are not joyful as a child’s should be. The one solace they may have is in outdoor play, but the structures available to them are bleak and unsafe.

It was not until 2012 that I returned to Russia. My son had been a US citizen for 6 years and my purpose for the return was not adoption related at all. I was a mother, but my connection to the tiny faces that peered through the fence or the hands that grabbed my pant legs would not let go. I was drawn to the children who’s only source of love was a woman in a white coat. I needed to do something. 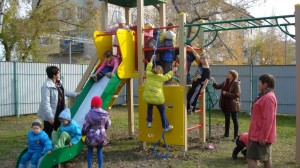 Through a relationship with the Slavyanka Women’s Society in Khabarovsk I was introduced to the Khor Village Social and Rehabilitation Center. In 2012 I was fortunate enough to visit the shelter. As I walked through the solid steel gate I opened my eyes to a large play yard with space for children to run and play. However, the scene was much like the previous two Baby Home’s I had visited, dire. I asked the staff of the shelter what they most needed for the children. I expected answers such as clothing or books. Their reply, “A playground.” They had everything to meet the needs of the children, but they could not give them the one thing the children needed most. A childhood.

It was at that moment that I realized that there is one thing Sweet Hope can do. We can blanket the world in playgrounds and ensure every child has a childhood.

I left Khor Village with a promise. I promised them that I would build them that playground, and I did. One year later a brand new playground was installed in their play yard. I could hear the laughter through the photographs they sent. I asked what more they needed. The reply, “The teenagers are jealous. They would like a sports court.”

Now here is where things take a turn. You see, I had the money for the sports court. Sweet Hope was given a small grant by a local church to build the court, or at least a portion of it. We were only waiting on specific details from the shelter before we ordered it. Our plan was to order it in the Fall so that it could be delivered by Spring. Unfortunately, bad things happen.

In October we discovered that our entire bank account was empty. The person we entrusted with our funds felt the need to take them. Nearly every last cent of what we worked so hard to earn was gone. Not only was the money gone, our hope of building the sport court was gone too. The person that took our money did not just take funds, she robbed children, who are facing some of the most difficult moments in life, of a basic human need. This is a person that I trusted. This is a person whom I thought was a friend, but I was wrong. I blame myself everyday for not discovering the loss sooner. I shoulder the fault for not being able to deliver what I promised. At the same time I am hurt. I want the children to know there is someone out there who is more than just the woman in the white coat. I want the children to know someone loves them and cares. I want them to know I see their pain. I cannot take it all away, but I can do one thing. I can help them forget for just a small minute. I can help them remember that they are just children and that laughter is the best medicine.

This Giving Tuesday please consider Sweet Hope. You are giving more than just money. You are helping to give children a childhood.